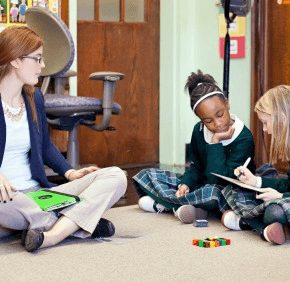 By Maria Wiering
mwiering@CatholicReview.org
The general election isn’t until November, but the primary election is June 24, with early voting June 12-19. With every seat in the Legislature up for election and one-third without an incumbent in the race, the primary election’s results will significantly shape the direction of Maryland’s lawmaking for years to come, said Mary Ellen Russell, Maryland Catholic Conference’s executive director.
The Maryland Catholic Conference, which advocates for public policy on behalf of the state’s bishops, urges Catholics not only to vote, but also to educate candidates about issues important to the local church.
In this article, the Catholic Review highlights the MCC issue of education.
Education
In 2012, St. Francis of Assisi School, Mayfield, was robbed – three times. School officials discovered the school’s old doors were warped and not locking properly, causing concern for student safety. The school took a collection to replace the doors and install a card-swipe system, but the fix was just one of several deferred-maintenance projects school administration would like to address.
“Our building is 60 years old; everything is failing or starting to fail,” said Principal Rebecca Malone.
St. Francis was among nonpublic schools benefitting from a state-funded program initiated in 2013 for aging schools. St. Francis received $12,200 last year for infrastructure and safety updates, which included new doors for its assembly hall. Malone testified before the Legislature to support the program in March.
The Nonpublic Aging Schools Program is one of the MCC’s successes, along with the Nonpublic Schools Textbook and Technology Program, which provided $6.04 million for non-religious textbooks and technology for nonpublic schools in 2014. It’s important that the Legislature maintain or increase funding for these programs, said Garrett J. O’Day, MCC associate director for education and family life.
The MCC is also urging the Legislature to create a new funding avenue for public and nonpublic students through a new tax credit. The Maryland Education Credit would provide companies and businesses a 60 percent tax credit on donations to nonprofit organizations that would distribute 60 percent of the funds to nonpublic school students, and 40 percent to public school students for educational expenses, including tuition.
Families with children attending St. Francis showed a need for $408,986 in tuition assistance, but the school can only offer about $100,000 each year. The tax credit could help its families “fill the gap” between the sticker price and what they can afford, Malone said.
Where do candidates stand? Check out the MCC survey
Related articles:
MCC pushes for immigrant driver’s licenses, textbook funding
Also see:
Outreach has lasting impact on NDP grads
Viva House steps up to help Spanish-speaking teen killed outside its doors
PrevNext