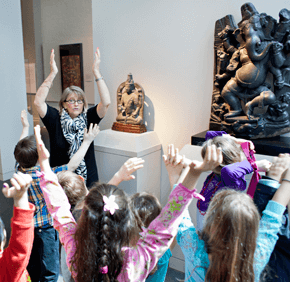 By Elizabeth Lowe
elowe@CatholicReview.org
Before leading a recent tour of the Walters Art Museum in Baltimore, Barbara Guarnieri told eager visitors they were about to embark on a journey.
“We are going on a trip almost around the world,” Guarnieri said to 13 first-graders from Timonium Elementary School April 11. “Our first stop is going to be in China.”
Guarnieri, a veteran docent at the Walters, educated her group about a Chinese porcelain wine jar decorated with depictions of carp, water weeds and lotuses.
“We’ll talk about the way the artist made the fish on here,” said Guarnieri, 62.
Students also learned about an Indian sculpture of the Hindu god Ganesha and a Japanese suit of armor with the Buddhist deity Fudo Myo-o.
“This outfit would have been worn in battle,” Guarnieri said.
Guarnieri, a parishioner of St. Ignatius in Baltimore, said her faith is the impetus for her volunteer work.
“The church asks you to give back,” she said. “I always want to give back.”
Guarnieri is a homemaker and former economist. She likened her work as an economist to being a docent.
“It’s making things that seem complicated easy to understand,” she said.
Guarnieri is one of 80 active docents at the Walters. She is vice chairwoman of the Walters’ Women’s Committee, past president of the docents and participates in the Walters’ docent book club. She also volunteers at Barclay Elementary School in Baltimore.
While docents have a two-hour weekly commitment, Guarnieri typically gives four tours each week during the school year. They also have a two-hour weekly training session, she said.
Docents give hour-long tours at the Walters, which has a current collection of more than 35,000 objects, said Guarnieri said, who began her docent training in 2000.
John Shields, docent manager at the Walters, said Guarnieri is devoted to sharing history, art and culture.
“Many of our students, when they come on the school tour, it’s their first time in the museum,” he said. “It’s a wonderful hour, opening a new world to our students. She feels very committed to doing that.”
Guarnieri relates to all types of visitors, which include students and adults, Shields said.
“We have groups from the private schools, from the Title I schools,” he said. “Barbara’s people skills make her welcome and embrace everybody.”
Guarnieri, who bubbles with energy and enthusiasm, plans to be a docent for as long as she is able. She relishes the fraternity amongst the docents, whom she described as lifelong learners who continuously hone their interpersonal skills.
“It forces me to be involved, active and ask questions,” she said. “You have to keep your mind active.”
Also see:
Spanish-speaking teen killed outside the doors of Catholic charity
Outreach experience has lasting impact on NDP grads
PrevNext