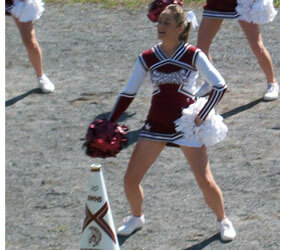 Paula Nolan has spent a good portion of her after-school hours this March moving between the tennis court, the basketball gym and a college field house.

Nolan, a senior, is the No. 1 singles player for the Bishop Walsh School and a member of the Spartans’ cheerleading squad. Last week, that meant remaining on campus in Cumberland and backing her fellow students in her school’s invitational girls’ basketball tournament, which was won by St. Frances Academy.

This week, that involves several trips to Frostburg State University, the site of the Alhambra Catholic Invitational March 18-20. In addition to Bishop Walsh, St. Frances Academy and Mount St. Joseph will play in what is regarded as the premier event of its kind in the nation for boys’ teams.

Nolan plans to spend a good portion of next winter in the same venue, as she will attend Frostburg State. She plans to cheer for the Bobcats, when she isn’t pursuing a biology major made possible by her No. 2 class ranking at Bishop Walsh.

Before she picked up a tennis racquet and played soccer for the Spartans, Nolan excelled in gymnastics. That background benefits her in cheerleading, which in recent decades has become more about acrobatic tumbling than lung power.

Nolan is true to her school in other areas.

A parishioner of St. Peter in Westernport, the southernmost parish in Allegany County, Nolan has been a student at Bishop Walsh since the sixth grade. A member of campus ministry since her freshman year, she is an extraordinary minister of holy Communion.

In the classroom, Nolan carries a 4.13 cumulative grade point average and takes advanced placement courses in biology and U.S. History. When Spartan Theater, the school’s drama club, performs West Side Story, Nolan will be on stage as a dancer.