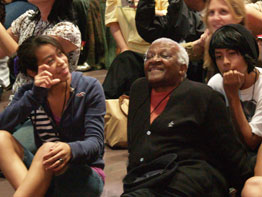 So when the foundation brought together six Nobel Peace Prize laureates to share their experiences, some 3,000 youths worldwide showed up to listen and to be mentored by the laureates Sept. 11-13 at Loyola Marymount University in Los Angeles.

When Ms. Ebadi called on the U.S. to reduce its military budget by 10 percent and to spend that money on education, the youths erupted with cheers and applause. Earlier she told the press that the U.S. would have better results dealing with terrorism if it built schools in places like Afghanistan.

“What I expect from you young people is not to be indifferent to the rest of the world,” Ms. Ebadi told students. “Elect peace, not war. Elect friendship, not animosity. Help humanity, not your financial interest. Pursue the truth. You can rest assured that you will succeed.”

Mr. Esquivel, who has labored for human rights and democracy in Latin America, challenged the young people to dream big.

“Each one of you has to make possible what is impossible,” he said. “We have two things to share. Bread that feeds our body, but also the bread that feeds our spirit. … The other thing we have to share is freedom. Without freedom we don’t have the ability to love, and without love the world doesn’t have any meaning. Freedom gives us the possibility of changing the world.”

Ms. Menchu said that her unsuccessful bid for the presidency of Guatemala last year nevertheless allowed her to challenge many racist prejudices about indigenous people.

“To make democracy you have to be on the inside,” she said of her decision to engage the political process.

PeaceJam says it is mobilizing an international youth movement to take on the most pressing global issues such as ending racism, eliminating extreme poverty, restoring the environment and breaking the cycle of violence.

“I’m just ecstatic to be in the presence of people who have changed things,” said Monica Aguilar, a senior at Bishop Conaty-Our Lady of Loretto High School in Los Angeles. “They are humble and fun, caring and will talk to youth and share their wisdom.”

Ms. Aguilar made the comments to The Tidings, newspaper of the Los Angeles Archdiocese. She serves on the campus ministry team and plans to join the school’s newly formed human rights group.

Young emerging leaders often direct their activism to the places they know the best – schools.

Kevin Patterson, 17, attended PeaceJam with 10 other Denver students who are developing an art project to address the hate and racism they say starts to bubble up with middle-school students.