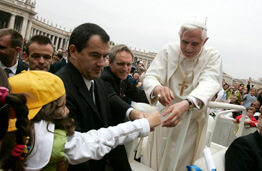 VATICAN CITY – When Pope Benedict XVI was elected in 2005, one of his first decisions was to stop presiding over beatification ceremonies.

Many people took this as a signal that the pope wanted to slow the flow in the Vatican’s saint-making pipeline. In fact, it looks like the opposite is happening.

Already in 2007, 10 people have been beatified in 10 different liturgies carried out by cardinals. That number is about to increase exponentially.

In late October, 498 Spanish martyrs of the 1930s civil war period will be beatified in a megaceremony in St. Peter’s Square. It’s the largest beatification in the church’s history, and Pope Benedict is expected to appear for a final blessing.

Throughout the rest of the year, many others will be elevated to the rank of blessed, including missionaries in Brazil, an Austrian who was decapitated for refusing to join Hitler’s army and an Italian theologian whose works were once condemned by the Vatican.

And already the beatification lineup is taking shape for 2008. It includes 188 Japanese martyrs of the 17th century – priests, religious and lay missionaries who were decapitated, burned at the stake or scalded to death in a volcanic hot spring.

Beatifications may be off the pope’s to-do list, but they are very much on the Vatican’s agenda these days.

“Beatifications are still quite important. What the pope wanted to do was highlight their meaning for the local churches,” said Monsignor Michele Di Ruberto, undersecretary of the Congregation for Saints’ Causes.

“If we have a beatification in Rome for a Brazilian, for example, maybe 300 pilgrims will come from Brazil. But if it’s done there, thousands and thousands will attend,” he said.

With the pope delegating beatifications, Vatican officials have been hopping all over the globe to preside over the liturgies.

The Vatican secretary of state, Cardinal Tarcisio Bertone, who recently beatified a 17th-century priest in Poland, will fly to Patagonia in November to beatify Zefferino Namuncura, the son of an Indian chief and the first indigenous Argentine to be declared blessed by the church.

Most of the beatifications, however, have fallen to Portuguese Cardinal Jose Saraiva Martins, prefect of the sainthood congregation. His desk job at the Vatican has turned into a frequent-flyer assignment.

Beatification, of course, is an intermediate step toward sainthood, not the finish line. When someone is declared blessed, he or she can be venerated locally, whereas canonization holds the person up as a universal model of holiness.

Beatifications often carry great meaning for local churches and occasionally generate much wider interest. When martyrs are involved, historical wounds can be reopened, as seen in the case of the 498 Spaniards to be beatified Oct. 28.

During the 1936-39 Spanish Civil War nearly 7,000 priests and religious were killed, most of them by supporters of the Spanish revolutionary government founded in 1931. Opposing the government was the fascist National Movement led by Gen. Francisco Franco. The fascists won and Franco ruled as a dictator until his death in 1975.

Most Spanish church leaders supported Franco during the 1930s because of the anti-clerical policies of the revolutionary government.

The sainthood causes of the Spanish martyrs were suspended by Pope Paul VI, but Pope John Paul II allowed them to move forward again. Critics argued that the late pope was playing politics by stirring up old divisions at a time when the Socialists had come to power in Spain.

Similar criticism has been voiced about this year’s ceremony, even though the Vatican has underlined that the martyrs are being beatified on strictly religious grounds.

One thing is clear: The Vatican has not tried to downplay the Spanish beatification, one of the few to take place in Rome under Pope Benedict. The liturgy had been scheduled for the Basilica of St. Paul Outside the Walls, but was moved to St. Peter’s to accommodate a larger crowd.

While beatifications continue to increase, canonizations are rarer events. Even so, Pope Benedict has created 14 new saints in his first two and a half years.

Although many assume Pope Benedict wants to cut back on the number of new saints, he once said that was a misreading of his remarks as a cardinal.

The point he wanted to make, he said, was that every canonization represents a choice for the church, and that “there are many more saints than those who can possibly be canonized.”