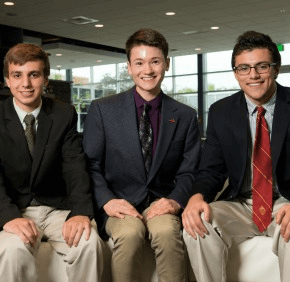 By Keith Meisel
Special to the Review
TOWSON – While many members of the class of 2016 at Calvert Hall College High School dreaded Finals Week, it was much less sinister for Justin Bucci and Yanni Kevas.
The two, who will attend the University of Maryland in the fall, planned to sleep in May 23, having enjoyed their last day of classes at the all-boys school in Towson the previous week.

Named for the Christian Brother who founded the school in 1845, the 20 McMullen Scholars in the class of 2016 completed a rigorous curriculum that required three Honors or Advanced Placement classes in English, social studies, classical languages, math and science each year. That exempted them from final exams.

McMullen Scholars, usually chosen before their freshman year, must take Honors Latin as ninth-graders and the Humanities as sophomores or juniors.

“I liked Latin,” Ehart said. “It was not too hard. I like linguistics.”

Field experiences, required of McMullen Scholars, included galleries from New York City to Washington, D.C. They also completed a Capstone Experience on a topic of personal interest, presented to the entire student body in their final semester.

“The Capstone (project) typically contributes to a challenging first semester for seniors,” wrote Louis Miserendino, a graduate of the program now in his third year as its director, in an email.

“All the college applications, a lot of AP stuff, and the Capstone, all meshed into one (semester),” said Kevas.

He plans to focus on neuroscience in college. His project was titled “Autism and Chimpanzees: A comprehensive analysis of what our closest ancestors can teach us about ourselves.”

Bucci, who plans to study mechanical engineering, examined the application of hydrogen energy as an alternative to fossil fuels and electricity. The stress of the first semester carried over, he said, since he did not select Maryland over Georgia Tech until April.

He was glad he followed his father and uncle, 1975 and ’74 graduates, respectively, to Calvert Hall.

“It was a good fit for me,” he said. “I worked hard, and was involved with the school.”

Bucci played tennis and squash, and was a four-year member of the Unmanned Aerial Vehicle Club, which included Kevas. He, too, was attracted to the Hall by family connections, specifically the experiences of his cousins.

“I became more of an extrovert, more involved in school activities, and a better writer,” Kevas said of his four years at the school.

As a junior, Kevas was on the team that won the school’s Red C Challenge for would-be entrepreneurs. This year, his team finished second.

Ehart, meanwhile, was captain of the It’s Academic team that went undefeated against Catholic schools.

An All-State singer who also plays piano, Ehart agreed that the Capstone Experience presented an additional challenge, as his interest in classical music led to his audio/visual presentation on “Musical Representations of Death and Mourning.”

Ehart considered heading to College Park with Bucci and Kevas, but will instead enter the University of Pennsylvania.