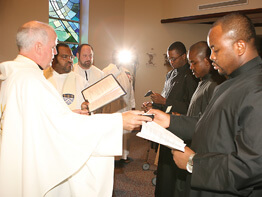 The three young men heard, “May the Lord strip you of the old man and all his deeds,” as they reached out to accept their habits.

They responded in heavily accented English, “May the Lord clothe me with the new man, who has been created according to God, in justice and holiness of truth.” Then they traded black pants and a white dress shirt for the black habit of the St. Joseph’s Society of the Sacred Heart, better known as the Josephites.

Father Edward J. Chiffriller, superior general of the St. Joseph’s Society of the Sacred Heart, celebrated the Investiture Mass for the three novices, who are from Nigeria, at the St. Joseph Manor Chapel in Roland Park on Oct. 2.

In his homily, he said, “We are to renounce our ways and put on the new man that is Christ Jesus. We know the alb, the habit can cover a multitude of sins. We are called each day to real conversion … the novitiate year is a special year of grace to grow in commitment.”

Later, Father Chiffriller explained that the Josephites started a formation project in Nigeria six years ago, in cooperation with the Missionaries of St. Paul, a community of Nigerian priests. “We got a lot of inquiries from Nigeria from guys interested in becoming Josephites,” he said.

“God is blessing the church in Africa with vocations,” Father Chiffriller said. “The faith is very strong, the parishes in many parts of the country are vibrant and that’s a result of the missionary efforts … vocations to the priesthood are abundant.” He speculated that the strong family life in Nigeria contributes to vocations.

The three novices, George Ajurchi, Xavier Edet and Leo Udeagu, journeyed toward this moment by spending four years in formation, three of them in Nigeria and then one in Washington, D.C. This novitiate year will be spent at the Josephites’ novitiate house in Roland Park.

They’ll gain a cultural understanding of American life, the American church and “the strength and challenges in African-American communities,” Father Chiffriller said. “They’re young and they’re dedicated, and they’re interested in learning.”

Said Leo Udeagu, “I grew up in a Catholic family and from my childhood days I felt that God was calling me – it was like a dream come true when I had a chance to join the Josephites.”