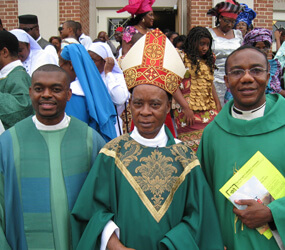 On the last Sunday of the month, the Baltimore chapter of the Nigerian Igbo Catholic Community celebrates Mass in its native language.

Its June 28 gathering was significant on several fronts. The more than 150 families in the chapter had a late acknowledgement of Father’s Day, heard a homily from primary celebrant Nigerian Bishop Victor A. Chikwe and made use of a new worship space, albeit still in northeast Baltimore.

The NICC, which gathered for two years at The Shrine of the Little Flower and spent the last decade at St. Matthew in Northwood, is in the process of relocating to St. Anthony of Padua.

“We are outgrowing St. Matthew,” said Dr. Frank Okechukwu, the chair of the NICC in Baltimore. “Meeting space was getting limited there.”

The international flavor of St. Matthew, with its dozens of nationalities, made it a natural base for the Igbo community, but St. Anthony of Padua has its own appeal.

The parish’s prayer garden, which lies just to the east of the church entrance on Frankford Avenue, includes a plaque that references Roots, the blockbuster 1977 television miniseries about Alex Haley’s ancestors, first brought to the U.S. as slaves.

“Though we are of different tribes and tongues, remember we are the same people!” reads a portion of the plaque, crediting an African elder in the screenplay.

Of no small matter to the NICC, the associate pastor of St. Anthony of Padua is Father Anthony Abiamiri, who is typical of the Igbo in Baltimore.

One of three dominant ethnic groups in Nigeria, the Igbo dominated in Biafra, which seceded from Nigeria in 1967. It had the support of the Vatican and Catholic Relief Services, but was not recognized by most countries.

A civil war resulted in approximately 1 million deaths, according to multiple media sources. Nigeria restored control in 1970. Biafra’s legacy includes the founding of Doctors Without Borders and waves of emigrants to the United States and other countries.

“We who are here because of the diaspora, this boosts our moral,” said Father Abiamiri, as he prepared to concelebrate Mass with Bishop Chikwe, the Bishop of Ahiara Diocese in Nigeria’s Imo State.

The NICC’s mission statement says that it will “ … cultivate a lasting fraternal community whereby moral and Christian values are cherished. The organization shall also provide spiritual guidance to Igbo children and facilitate the assimilation of newly arrived Igbos into local parishes.”

According to Dr. Frank, one of the primary goals of the NICC is to “make sure that our kids don’t get lost in the shuffle.”

“In a diaspora, the tendency is to forget your roots,” Dr. Frank said. “We want to send a strong message: maintain the morals you grew up with, don’t forget to keep your eyes on the prize and don’t forget your family.”

Dr. Frank, a manager at Bon Secours Hospital, said his brother Clement was killed in the civil war in Nigeria, in 1968.

He is the third chair of the Baltimore chapter of the NICC, following Aloysius Ibe and Bert Ekeocha.

Members of the Knights of Columbus St. Matthew International Council 11787, including Grand Knight Hyacinth U. Nwachukwu, were among the worshippers June 28.

After 1:30 p.m. Mass, a celebration of Igbo culture continued in the St. Anthony of Padua parish hall until 7 p.m.