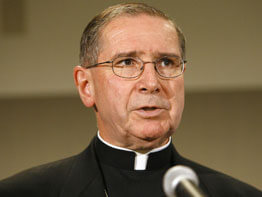 LOS ANGELES – Los Angeles Cardinal Roger M. Mahony told archdiocesan priests in October that he was assaulted during the summer by a man who was angry over the church’s sexual abuse scandal, according to reports from priests who attended the annual meeting.

The Associated Press, Los Angeles Times and New York Times reported Dec. 5 that Cardinal Mahony talked about the assault during an Oct. 1 priests’ pastoral meeting, as an illustration of the toll the abuse scandal has taken on everyone in the church.

The three news organizations each quoted several priests confirming that Cardinal Mahony had described being knocked down and beaten or kicked by a man who shouted obscenities and made angry statements about sexual abuse by priests.

Carolina Guevara, archdiocesan spokeswoman for the Los Angeles Archdiocese, declined to comment to any of the publications or to Catholic News Service.

“The annual presbyteral gathering is private,” Guevara said in a Dec. 5 e-mail reply to CNS. “Any conversation that took place during that meeting was between the priests and their bishop.”

According to the news accounts, Cardinal Mahony told the priests the attack occurred as he walked to a mailbox near the Cathedral of Our Lady of the Angels in downtown Los Angeles.

He said it occurred shortly after the July 14 announcement of a $660 million settlement by the archdiocese with more than 508 plaintiffs who sued over claims they had been sexually abused by priests or other church workers. Payments from that settlement were sent out Dec. 4.

The AP story quoted a priest who said the cardinal was hospitalized and that it took him weeks to recover. No report of an assault was filed with the Los Angeles Police Department. But a police spokesman said after the story came out Dec. 4 that the department was trying to reach the cardinal to discuss what happened.

According to the Los Angeles Times, Cardinal Mahony “offered the story almost in passing, as a way of illustrating the personal toll that the sexual abuse scandal had exacted on everyone in the church, but especially its hundreds of victims.”

In breaking the story Dec. 4, the Los Angeles Daily News quoted priests who had been at the meeting as saying the cardinal said the attack gave him a deeper understanding of the suffering of abuse victims.

“The main message was that his wounds healed within a month, bruises and all, but the victims of child abuse are still suffering after many years, that their wounds are far deeper than what he experienced,” said Father Sal Pilato, principal at Junipero Serra Catholic High School in Gardena, according to the Daily News.