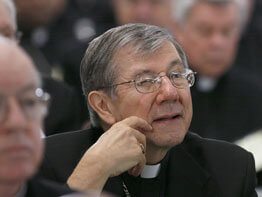 BALTIMORE – The announcement of dates and locations for Pope Benedict XVI’s U.S. visit next year highlighted the first day of the U.S. bishops’ fall general meeting in Baltimore. The April 15-20 trip will include visits to New York and Washington and an address at the United Nations.

The bishops also discussed a draft statement on Iraq during the first day of the Nov. 12-15 meeting.
Citing an alarming political and partisan stalemate in Washington, the draft statement called the Iraq situation “‘unacceptable and unsustainable.” It lays out a moral framework for a transition in Iraq.
The meeting’s first day saw the introduction of several items to be dealt with before the four-day meeting concluded, including a new document on music in worship, catechetical guidelines for chaste living, and the quadrennial updating of the bishops’ “Faithful Citizenship” statement.

Archbishop Pietro Sambi, apostolic nuncio to the United States, announced the details of the papal visit during his remarks to the bishops.

According to the archbishop, the pope will arrive in Washington April 15 and will receive an official welcome at the White House April 16. That afternoon – coincidentally, his 81st birthday – he will address the U.S. bishops.

On April 17 he will celebrate Mass at the new Washington Nationals baseball stadium in Washington. Later that day he will meet with directors of Catholic universities and colleges and diocesan educational leaders at The Catholic University of America. He also will attend an interreligious meeting at the Pope John Paul II Cultural Center.

On the last day of his visit, April 20, the pope will visit ground zero, the site where the twin towers of the World Trade Center stood before they were brought down in the Sept. 11, 2001, terror attacks. In the afternoon, he will celebrate Mass at Yankee Stadium.

The draft statement on Iraq said, “Our country needs a new direction to reduce the war’s deadly toll and to bring our people together to deal with the conflict’s moral and human dimensions. Our nation needs a new bipartisan approach to Iraq policy based on honest and civil dialogue.”

The draft, to be released in the name of Bishop William S. Skylstad of Spokane, Wash., president of the U.S. Conference of Catholic Bishops, called for more sustained efforts to collaborate with other nations, including Syria and Iran, as “critically important for bringing some measure of stability to Iraq.”

“Iraq’s future stability is related to the stability of the region,” it said. “This is why U.S. leadership to advance a just peace for Israelis and Palestinians is critical.”

The “dire situation of refugees, internally displaced persons, Christians and other vulnerable minorities” has been neglected, the draft statement said.

“A staggering 2 million refugees have fled Iraq; another 2 million Iraqis are internally displaced,” it continued. “The U.S. should immediately make more substantial commitments to Iraqi refugees by expanding admissions, eliminating roadblocks to resettlement and supporting countries in the region burdened with war-related refugee populations.”

In his last official address Nov. 12 as USCCB president, Bishop Skylstad urged a leadership style that does not measure success “moment to moment” but instead follows the example of Jesus and Blessed Mother Teresa of Calcutta.

“We cannot shrink from our calling to be shepherds, to be leaders,” he said. “As Christ made it his mission to show us his Father, to teach us to seek the will of his Father, we cannot in fidelity to him renounce or weaken our proclamation of the truth.”

Bishop Skylstad said, “We need to continue to speak out and teach our people joyfully to embrace life, to incorporate fully the church’s vision about chastity and the nature of marriage, and to understand the humanly and spiritually corrosive results of the contraceptive mentality and lifestyle.”

“As shepherds, we will continue to be clear about the fundamental injustice of abortion and of sacrificing sacred human lives at their earliest moments for the sake of progress in medicine and science, or for convenience,” he added.

The day before the meeting began, the bishops gathered for a Mass at the Basilica of the National Shrine of the Assumption of the Blessed Virgin Mary in Baltimore. The Mass marked the 200th anniversary of Mount St. Mary’s University in Emmitsburg.

Cardinal William H. Keeler, retired archbishop of Baltimore, said in his homily, “God does keep his word and does not fail us, no matter what the circumstances,” adding that “God’s grace is there to help us … not to take the trouble away but to give us the strength to bear it.”