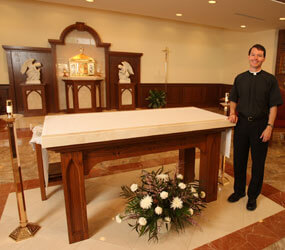 ILCHESTER – The first time Jeanne Martin walked into the newly renovated church at Our Lady of Perpetual Help in Ilchester, her jaw dropped – literally.

“I was still breathless for five minutes,” said Martin, who was awed by the brightened sanctuary’s new gleaming tabernacle and twin statues of adoring angels.

“It’s so fantastic,” she said. “It gives you a sense of reverence. Anyone can walk in and know that something really special happens in that space.”

Martin’s comments aren’t out of the ordinary. After 25 years of worshipping inside a modernistic church that lacked statues and featured a sanctuary set against dark-colored bricks, parishioners are raving about what Martin called a “church that looks like a church.”

“The previous sanctuary was a huge field of brick,” said Father Erik J. Arnold, pastor. “It was so long and had so much going on, that your eye moved back and forth without finding a place to rest.”

A major goal of the renovation was to bring the focus to the altar, tabernacle and crucifix, Father Arnold said.

“We wanted to remind people that at Mass, they are taking part in a banquet in heaven,” the pastor said.

As part of the refurbishment, the length of the sanctuary was reduced by 12 feet. The brick was covered with white drywall and new lighting was added.

Italian porcelain tile was introduced on the sanctuary floor, with white and red marble placed under a new wooden ambo and altar. Tom Gregorini, a parishioner, completed special wainscoting. A new baptismal font, Stations of the Cross and altar furnishings were added. A statue of St. Joseph was also introduced, and new kneelers and pew cushions were installed.

St. Jude Shop in Philadelphia and Select Contracting in Frederick worked on the project. The renovation cost approximately $320,000.