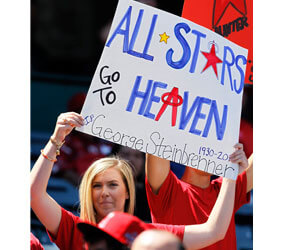 Both prelates also praised him for the “extraordinary kindness and generosity” he showed in arranging for Yankee Stadium to welcome Pope John Paul II in 1979 and Pope Benedict XVI in 2008.

Steinbrenner died July 13 at St. Joseph’s Hospital in Tampa, Fla., after suffering an apparent heart attack at his home. He was 80.

The Steinbrenner family planned to have a private funeral.

An Associated Press story described him as “baseball’s bombastic Boss,” a nickname he earned for his manner as a hands-on baseball executive. He was considered one of the sport’s most controversial figures because of his outspokenness, his meddling in daily decisions on the field and his efforts to drive up player salaries.

Steinbrenner “both inspired and terrorized the Yankees in more than three decades as owner,” wrote Ronald Blum, AP sports writer, in a July 13 obituary. “Once reviled by fans for his overbearing and tempestuous nature, Steinbrenner mellowed in his final decade and became beloved by employees and rivals alike for his success.”

During Steinbrenner’s 37 years as the team’s owner, the Yankees won seven World Series and earned 11 pennants.

“When I was a young boy and budding baseball fan growing up in St. Louis, everybody knew of the great New York Yankees,” Archbishop Dolan said in his statement July 13. “Even when they were your opponent, they were a team to be admired and respected.”

The archbishop said it was “a great joy” to be invited by Steinbrenner “to join him in his box for the grand opening of the new Yankee Stadium in April 2009, as well as for a World Series game last October. They were experiences I’ll never forget,” he said. “Mr. Steinbrenner and his family were very warm and welcoming to me, the new kid in town.”

Archbishop Dolan is a former auxiliary bishop of St. Louis and former Milwaukee archbishop who was installed to head the New York Archdiocese in April 2009.

He said he has since learned that such acts of kindness “were very much in keeping with the Steinbrenner tradition, and Catholic agencies here in New York and in Florida were often the beneficiary of his and the Steinbrenner family’s generosity.”

“Following the devastating earthquake in Haiti this past January,” he said, “the Steinbrenners and the New York Yankees responded immediately with a $225,000 donation to Catholic Relief Services,” the U.S. bishops’ overseas relief and development agency.

“Mr. Steinbrenner will have a special remembrance in my Masses and prayers,” he added.

In his statement, also released July 13, Cardinal Egan said he had just written to Steinbrenner to wish him a happy 80th birthday and to thank him again for his generosity to the archdiocese during Pope Benedict’s visit.

So it was “with the deepest sadness” that he learned “of the passing of this great New Yorker,” he said.

“George Steinbrenner was not only a marvelous leader of the New York Yankees, he was also an exemplary citizen of our community,” said the cardinal.

“His many acts of charity in favor of Catholic institutions, his kindness to Cardinal (Terence) Cooke when Pope John Paul II came to New York in 1979, and his deeply appreciated goodness to me and so many of our clergy and religious will never be forgotten,” Cardinal Egan said.