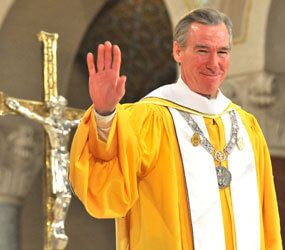 WASHINGTON – Calling for a rebirth in Catholic intellectual life, a pursuit that leads to virtue, John H. Garvey was sworn in Jan. 25 as the 15th president of The Catholic University of America in Washington.

“As Pope Benedict said at this university in 2008, ‘this is a place to encounter the living God. … This relationship elicits a desire to grow in the knowledge and understanding of Christ and his teaching,’ ” Garvey said in his inaugural address.

Washington Cardinal Donald W. Wuerl, Catholic University’s chancellor, was the main celebrant and homilist for the inaugural Mass, celebrated at the Basilica of the National Shrine of the Immaculate Conception.

“The Catholic University is a university – a community of scholars united in a common effort to find goodness, truth and beauty,” said Garvey, 62, who was dean of Boston College’s Law School when he was appointed to his new post.

For the Mass, which opened to the stirring strains of “Holy God We Praise Thy Name,” hundreds of faculty members, dressed in their full academic regalia, as well as university staff, members of the university’s board of trustees, alumni and students filled the cavernous basilica. Students were excused from class to attend the Mass.

Presidents of and representatives from universities and colleges throughout the country also were in attendance. Many members of Garvey’s family were present for the liturgy, with his five children serving as gift bearers.

Garvey and his wife, Jeanne, also have 12 grandchildren, a number of whom were in attendance along with other relatives.

He recited the profession of faith and took an oath of fidelity, swearing he will “preserve communion with the Catholic Church.”

In his homily, Cardinal Wuerl praised Garvey, describing him as “a leader who realizes the worth, but also the identity and heritage of this institution. We pledge our collaboration as he undertakes the mission to bring us into a future that holds renewal of spirit, academy, institution and achievement.”

The cardinal assured Garvey and the university that his prayers are with them.

“We ask God’s blessings on this entire academic community, that in the outpouring of the Holy Spirit and with your direction, we might all be led more surely and confidently to a deeper and richer grasp and embrace of our faith.”

In his address, Garvey, who is Catholic University’s third lay president, also talked about the secular concept of a conflict between faith and reason.

“The story of this war is so familiar that we often redescribe the conflict of faith and reason as a conflict of religion and science,” he said. “And the challenge for Catholic universities is finding a place for Bibles and papal decrees between our telescopes and microscopes.”

One of the ways to counter that notion, he said, is to examine the role of virtue in intellectual and campus life.

“A Catholic university should be concerned with the formation of its students. Campus ministry, residence life, service opportunities, athletics, and student activities are an integral part of our mission,” Garvey said. “The measure of our success is how our graduates live their daily lives: Do they pray and receive the sacraments; do they love the poor; do they observe the rest of the beatitudes?”

These days, ethics classes are popular in secular universities, he said. But does that go far enough? he asked. He proposed that “we do not come to understand what is right, or good, or beautiful, through mental exercises conducted from an armchair.”

He added, “We come to know virtue by seeing it, we learn from virtue by practicing it, we become virtuous when our practice makes it habitual, a part of our character.”

Garvey urged those in Catholic academic life to see how virtue guides the intellect. “It’s not the other way around. The particular goals we set for ourselves are illuminated by our character or moral orientation,” he said. “In our efforts, Aristotle says, ‘Virtue makes us aim at the right mark, and practical wisdom makes us take the right means.’ ”

He noted the pursuit of virtue can and should be applied to any field of study – not just philosophy or the law, but the social sciences, music, art or architecture as well.

Lastly, he addressed the role of the Catholic university’s unique contribution to the acquisition of virtue. “We learn it better as members of a group,” he said. “We deliver one message about materialism, sex, self-sacrifice and alcohol; our children see another in (the world). Our lesson gains credibility if the children see a community of people they know and admire living it.”