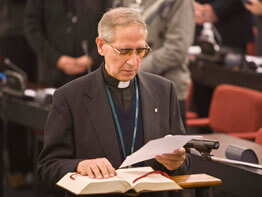 ROME – Spanish-born Father Adolfo Nicolas, the newly elected superior general of the Jesuits, called on the more than 19,000 members of his order to strengthen their service to the poor and those excluded from the benefits of economic globalization.

Father Nicolas, who had been moderator of the Jesuit Conference of East Asia and Oceania, was elected superior general of the Society of Jesus Jan. 19 and celebrated a Mass of thanksgiving Jan. 20 in Rome’s Church of the Gesu.

The new superior, who said his election was “a shock,” began his homily by saying, “This is not a message for the world, but a simple reflection.”

“As Christians, as Jesuits, as people of God,” he said, “we are called to serve. The more we serve, the more we please God.”

Father Nicolas emphasized the Jesuits’ missionary focus and said there are “other nations, not geographical, but human, who ask our help: the poor, the marginalized and the excluded.”

The 217 voting delegates to the Jesuit General Congregation elected Father Nicolas, 71, on their second ballot. He succeeds Father Peter-Hans Kolvenbach, 79, who had asked to resign because of his age.

Pope Benedict XVI was informed of the election of Father Nicolas before the Jesuits announced it publicly.

The election came after four days of prayer, silence and quiet one-on-one conversations among the voting delegates, who were chosen to represent the more than 19,000 Jesuits around the world.

Father Nicolas was ordained to the priesthood in Tokyo and is the former Jesuit provincial of Japan. He also served as director of the East Asian Pastoral Institute in Manila.

The Jesuit served as theological adviser to the Japanese bishops attending the 1998 Synod of Bishops for Asia. Some Vatican officials had been surprised during the synod when the Japanese bishops and many other participants urged the Vatican to demonstrate greater respect for their knowledge of their local languages and cultures, particularly when it came to approving the translation of liturgical texts and aspects of local culture in Catholic prayer.

Several Jesuits in Rome confirmed that the Jesuits had wanted to name Father Nicolas rector of the Pontifical Gregorian University in Rome in 1998, but his name was withdrawn in the wake of the synod discussions.

Interviewed in December about his hopes for the work of the General Congregation, Father Nicolas said, “I have a feeling, still imprecise and difficult to define, that there is something important in our religious life that needs attention and is not getting it.

“We have certainly been diligent in addressing our problems whenever we have seen them,” he said, noting the focus of past General Congregations, “but the uneasiness in the society and in the church has not disappeared.”

In the interview, with the Province Express, the newsletter of the Australian Jesuits, he said, “The question for us is: Is it enough that we are happy with our life and are improving our service and ministry? Isn’t there also an important factor in the perception of people (‘vox populi’) that should drive us to some deeper reflection on religious life today?

“How come we elicit so much admiration and so little following?” he asked.

He concluded by telling the newsletter that he hoped the General Congregation would begin “a process of dynamic and open reflection on our religious life that might begin a process of re-creation of the society for our times, not only in the quality of our services, but also and mostly in the quality of our personal and community witness to the church and the world.”

Jesuit Father Thomas H. Smolich, president of the Jesuit Conference of the United States, told Catholic News Service that Father Nicolas “is a great man. He is inspirational, he is holy and he represents a great bridge among the various cultures in the church.”

Father Smolich said he had gotten to know the new general as they both served on the commission preparing for the General Congregation. Although Father Nicolas is 71, “he has the energy of a much younger man.”

In a Jan. 10 letter to the Jesuits, Pope Benedict asked them to reaffirm their “total adhesion to Catholic doctrine,” particularly regarding interreligious dialogue and various aspects of sexual morality.

Born April 29, 1936, in Palencia, Spain, Father Nicolas entered the Jesuit novitiate in 1953. After earning a degree in philosophy in Spain, he was sent to Japan to study theology. He was ordained a priest in Tokyo in 1967.

After earning a master’s degree in theology from Jesuit-run Pontifical Gregorian University in Rome, he returned to Japan and taught systematic theology at Sophia University in Tokyo.

From 1978 to 1984 he was director of the East Asian Pastoral Institute in Manila. From 1991 to 1993 he was rector of the program for Jesuit scholastics in Japan, and in 1993 he was appointed provincial for Japan.

Before being named moderator of the Jesuit Conference of East Asia and Oceania in 2004, he spent three years working in a poor immigrant parish in Tokyo, living with and ministering to Filipino and other Asian immigrants.