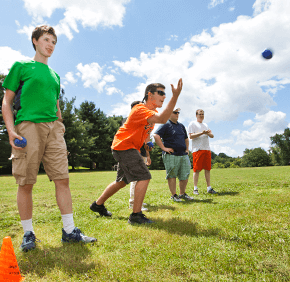 By Elizabeth Lowe
elowe@CatholicReview.org
PIKESVILLE – Daniel Acquard first considered the priesthood five years ago as a freshman in high school.
Any angst Acquard had about the entering the seminary was calmed last summer when he attended Baltimore’s first Quo Vadis retreat, an overnight vocations camp for young men, which the 18-year-old said profoundly impacted his life and discernment process.
“It helped me fall in love with religious life, with church life,” said Acquard, a parishioner of St. Francis of Assisi in Fulton. “Quo Vadis is what helped me apply for the seminary. I saw how normal the seminarians were and that attracted me.”
Four of the six seminarians accepted into formation this year for the Archdiocese of Baltimore participated last summer in Quo Vadis at Mount St. Mary’s University and Seminary in Emmitsburg.
In addition to Acquard, Karl Discher, 18, of St. Ignatius in Hickory; Patrick Gill, 19, of St. Peter the Apostle in Libertytown; and Niko Wentworth, 21, of St. John the Evangelist in Severna Park also experienced the retreat, which in Latin means “Where are you going?”
The other new seminarians are Nathan Davis, 40, of Resurrection of Our Lord in Laurel and a former Anglican; and Brendan Fitzgerald, 30, of Church of the Immaculate Conception in Towson.
Davis and Fitzgerald will attend Mount St. Mary’s Seminary, while the other four will attend St. John Paul II Seminary in Washington, D.C., and take classes at The Catholic University of America.
The new seminarians spoke to the Catholic Review July 31 while on retreat at the Holy Trinity Spiritual Center in Pikesville.
Father Michael A. DeAscanis, vocations director, is encouraged priestly vocations are coming from within the archdiocese. In the past three years, 18 men have been accepted, 17 from the archdiocese. That is significant, he said, because from 2010 to 2013, no men from the archdiocese were ordained.
“We want to encourage teachers and youth ministers to keep the question of vocation before our young people,” he said.
Twenty-six men are studying to become priests for the archdiocese, Father DeAscanis said. Twenty-three are from the United States, one is from Puerto Rico, and the others are from Colombia and Uganda.
According to Father DeAscanis, of those from the U.S., 12 went to public school, eight went to Catholic schools and four were home-schooled.
Acquard is a 2014 graduate of Reservoir High School in Fulton; Discher, who was homeschooled, was enrolled at Harford Community College in Bel Air; Gill, who was also homeschooled, attended Franciscan University of Steubenville in Steubenville, Ohio, for two years; and Wentworth, a graduate of Annapolis High School, attended St. John’s University in Queens, N.Y., for three years.
Like Acquard, Gill described his experience at Quo Vadis last summer as “enlightening.”
“It was another opportunity to confirm the call,” he said.
Following the Easter Vigil in 2013, Gill recalled being asked by another parishioner when he would be ordained a priest. Caught off guard, he replied that he was not a seminarian, all the while feeling a “burning desire” to grow closer to God.
Last summer, Gill spent a month with his brother, Father Joseph Gill, in the Diocese of Bridgeport, Conn. He lived in a rectory and shadowed priests.
“I came back concretely sure I needed to enter seminary now,” he said.
Like Gill, Wentworth also described a powerful moment in church which shaped his decision to enter seminary.
The summer following ninth grade, Wentworth attended eucharistic adoration for the first time. He remembered praying to God about what to do with his life and feeling the “intense desire” to enter the priesthood.
“It came out of nowhere,” said Wentworth, who noted that desire grew. “It remained constantly there.”
Discher also first considered the priesthood at an early age, as a preteen. He remembers watching the priest at the altar and thinking, “I would like to do what he is doing.”
About five years after he first considered the priesthood, Discher considered other careers. While he is interested in math and science, he said those subjects weren’t fulfilling. He again considered the priesthood.
Since deciding to enter the seminary, the nagging feeling he had has subsided.
“I feel like God has awakened me,” Discher said. “I feel like I’m awake now.”
Father DeAscanis encourages parents to teach their children the following daily prayer: “Lord, show me your will for my life, and help me to desire it.”
Also see:
‘Wake up call’ : Sellinger takes new role as chancellor of schools
Father Klein, 80, longtime hospital chaplain dies
PrevNext