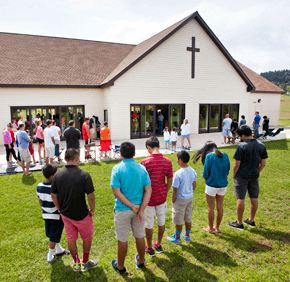 By Maria Wiering
mwiering@CatholicReview.org
McHENRY – Five minutes before 11 a.m. worship, every seat at St. Peter at the Lake Center was taken.
No problem.
Just beyond the sliding glass doors that double as side walls, Massgoers lined the patios with lawn chairs. One man parked his SUV within view of the altar and sat on its tailgate. Others, wearing sweatshirts and sandals, spread blankets, sat on the grass or stood.
It was a typical summer Sunday at St. Peter at the Lake, which St. Peter the Apostle in Oakland built in 2009 to accommodate Deep Creek Lake vacationers.
The Lake Center – as most parishioners call it – stands 13 miles north of the Oakland church, in the hills surrounding Maryland’s largest lake. It’s the pinnacle of the Garrett County parish’s outreach to vacationers, who visit the resort area for both summer and winter recreation. Mass is held there year-round, with two per weekend in the summer, and one in the winter.
To view a photo slideshow, navigate the arrows below.
See a photo you would like to purchase? Click here.
A committed group of parishioners – most in their 80s – care for the building, prepare for Mass and welcome guests. Often, those volunteers attend both weekend summer Masses. Most are vacationers-turned-residents.
That was clear the first Sunday in August, when Monsignor Paul A. Byrnes, a retired priest who assists the parish, asked visitors to raise their hands. More than half of the attendees did.
Then he asked how many were born in Garrett County. Only a few responded.
Moveable feast
The others were transplants, such as Dolores Gloeckl, 86, the Lake Center’s coordinator. Her family began vacationing at the lake in 1979, and moved there permanently from southwest Pennsylvania in 1992.
Before the Lake Center was built, Gloeckl organized weekly outdoor Masses on the lawn outside the Honi-Honi, a lakeside tiki bar. She kept the altar – a folding table – in her trunk, along with collection baskets and a crucifix.
Parishioners remember the Honi-Honi Masses fondly, including their quirks: the bar’s gorilla statues perched on the roof, dogs sitting by their owners, a stampede of parishioners to Uno Pizzeria next door for post-Mass brunch. Some attendees would arrive by boat, roping them to the bar’s docks.
“It was awesome,” said Tom Mitchell, who, with his wife, Joan, is a vacationer turned resident.
The Mitchells still divide their weeks between the resort town and an apartment they keep in Pittsburgh, but consider the lake – and St. Peter’s – home.
“We felt welcome as vacationers,” said Joan, who sings in the parish choir, a common point of entry for weekenders into parish life. The duo led music with their guitars at a recent Lake Center Mass.
Monsignor Byrnes, then an avid skier, started offering a Mass for winter vacationers near the slopes more than 45 years ago, when chaplain at Bishop Walsh School in Cumberland. Under the leadership of longtime St. Peter pastor Monsignor Martin E. Feild, it evolved into a summer outdoor “Mass on the Grass” at Wisp Resort, a ski and golf destination, with winter Masses at a nearby Methodist church.
The Lake Center capitalizes on its convenience to lake homes, ample parking and handicap accessible main entrance – things the Oakland church lacks.

“Half of them I don’t think would go to Oakland,” Gloeckl said of the vacationers.
“They love it here. They love the atmosphere, they love the friendliness. Some of them rave about it. Some of them can’t wait until they come back.”
Todd Bertges, 44, said the Lake Center makes St. Peter seem “like a church for everybody.” He grew up in Erie, Pa., resides in Portland, Ore., and he and his wife and child meet his parents, siblings and their families in Deep Creek Lake for an annual weeklong family vacation, now a 17-year tradition.
Second home
Some vacationers have registered with the parish, making the official household count somewhat misleading, said Donna Cook, St. Peter’s office manager. On paper, it’s 412, but some are only there for part of the year. Cook estimates the “core group” is 250.
Patty Pool, 66, is among vacationers registered both at St. Peter and another parish. For Pool, that’s St. Augustine, Elkridge, where she was raised and still lives in the winter. She and her husband, Ron, spend spring, summer and fall at Deep Creek Lake.
St. Peter is not “a home away from home,” but rather a second home, she insisted, adding, “I feel very much like both are my church.”
Many vacationers never register, but are still involved in parish ministries. Cook directs a volunteer “instant choir” at the Lake Center, where anyone is invited to sing. Vacationing youths fill in as altar servers, and families contribute to the parish’s community services.
Even the Knights of Columbus’ food booth at the Garrett County Fair draws volunteers from among vacationers who want to help fund Oakland Council No. 1771’s charitable causes, one pit-beef sandwich at a time.
“I think the parish realizes that we’re dependent upon the vacationers to come,” said Tom Briggs, 65, a longtime Knight who moved to Deep Creek Lake from Montgomery County nine years ago. He was manning the food booth Aug. 2, the fair’s last day.
“We wouldn’t have what we have now – the church, the buildings and the Lake Center – if it wasn’t for the vacationers,” he said.
Having two worship locations can lead some parishioners to an “us-and-them” outlook, acknowledged Father C. Douglas Kenney, St. Peter’s new parish administrator.
He was appointed to St. Peter from St. Margaret, Bel Air, following the unexpected death of Oakland’s longtime pastor, Father Donald J. Parson, in April.
Father Kenney’s goal is to continue Father Parson’s work to more fully unite the communities within St. Peter, whose motto is “one parish with two locations.”
It’s his biggest challenge, he said, but thinks holding Father Parson’s funeral at the Lake Center was a unifying moment.
“It’s just so neat to see it coming together,” he said.
Also see:
New seminarians include four who participated in vocations camp
‘Wake up call’: Sellinger takes up new role as chancellor of schools
PrevNext