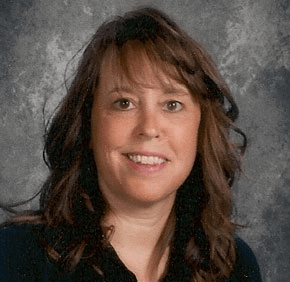 Christine Blake is taking the helm as the new principal of St. John the Evangelist School in Hydes, succeeding longtime principal Genevieve Delcher.

“I already feel at home here,” Blake said. “It’s such a vibrant community.”

In the past few years, Blake said SMART boards have been installed in classrooms. As the school’s leader, she is focused on continuing to integrate technology throughout the school.

“We’re working on a more interactive (school) website,” Blake said. “All of our teachers are having their own websites. We were just able to Skype our announcements to our pre-K building (not attached to the main building), so we’re working with a lot of interactive technology.”

While St. John is smaller than some schools, Blake said “we’re providing the same educational tools as many of our bigger counterparts.”

She is also focused on listening to the school community’s needs.

The school currently has 195 students, about the same as last school year.

“He has been so instrumental in my transition, in really being supportive of my ideas for Catholic education,” Blake said.

Previously, the parishioner of Immaculate Heart of Mary, Baynesvile, was assistant principal at its parish school from 2008 to 2012 and a religion and language arts teacher at the school from 1998 to 2008. She taught summer school at Calvert Hall College High School in Towson from 1993 to 1999 and was a teacher and assistant at The Children’s Guild in Towson from 1987 to 1990.

Blake earned a bachelor’s degree in psychology and a master’s degree in education and special education, both from Loyola University Maryland in Baltimore.