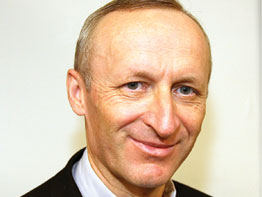 Archbishop Edwin F. O’Brien has appointed two priests who are natives of Poland to fill the positions of pastor and associate pastor of Holy Rosary, Fells Point, effective Nov. 1.

“I attended a funeral at Holy Rosary last year and remembered what a beautiful church it was,” said Father Michalski, who has served as pastor of three other parishes in North America. “I was very pleased when I learned I would become the new pastor of this church.”

Born in Lipiany, Poland, Father Michalski entered the Society of Christ in 1979, was ordained in 1986 and arrived in the United States in 1988.
For the past nine years he served as pastor of St. Hedwig, Oshawa, Ontario, and was pastor of Our Lady Queen of Peace, Calgary, Alberta, from 1993-1998.

“I’m beginning to hear the heart beating of the parish and the community,” Father Michalski said. “It’s been my experience that it takes about a year to learn the main concerns about the church and the community.”

Father Murawka was born in Trzebiatów, Poland, entered the Society of Christ in 1987 and was ordained in 1994. He worked in parishes in Poland after his ordination and came to the United States this past August. Holy Rosary is his first appointment since arriving in this country.