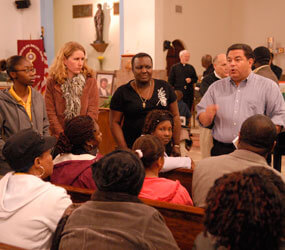 NEW ORLEANS – Haitian Catholics in New Orleans, many of whom lost loved ones in the cataclysmic earthquake that rocked the impoverished nation Jan. 12, gathered for Mass Jan. 15 at St. Katharine Drexel Church, seeking to support each other emotionally and spiritually and exchanging the latest bits of precious information.

Not unlike the uncertain days following Hurricane Katrina in 2005, many Haitians who attended the Mass, celebrated by Auxiliary Bishop Shelton J. Fabre of New Orleans, said they had not been able to make contact with their extended families to ascertain their condition.

Most of the news that did get through was not good, said Fenelle Guillaume, who in December had led a small group of Haitian Catholics to take Christmas gifts and supplies for children at a school located 45 minutes north of Port-au-Prince, Haiti’s capital.

“I have a cousin who was buried two days ago,” Guillaume said. “I have two uncles whose building collapsed to the ground, so no one survived in that building. As I was coming to Mass here, my sister (who lives in Chicago) was on the way to give my mother the news (about the relatives). So, I’m just trying to put everything behind my head right now.”

“Everybody was touched,” she added. “Everybody’s a victim. Anytime someone calls you, it’s bad news. We have more bad news than good news.”

Martin Gutierrez, executive director of neighborhood and community services for Catholic Charities in the Archdiocese of New Orleans, told those at the Mass that the U.S. Department of Homeland Security had authorized granting temporary protected status to undocumented immigrants from Haiti living in the U.S. as of Jan. 12.

“This is huge because people will be able to work here and send money home,” Gutierrez said. “Something like this happened back in the late ‘90s with Hurricane Mitch in Nicaragua. The U.S. provided temporary protected status to Hondurans and Nicaraguans for a period of 18 months, and it’s been renewed ever since.”

Gutierrez said the biggest roadblock that immigrants may have in gaining temporary protected status is the $500 fee charged by the federal government to process the application.

“We’re going to be working on that,” Gutierrez said. “We have talked to some of the leadership in the local Haitian community to help us get the word out and see how we can help. Maybe we can apply for a waiver. Sometimes they grant it, sometimes they don’t.”

In his homily, Bishop Fabre reflected on the Gospel reading in which Jesus rebuked the winds and calmed the waves that the apostles thought would swamp their boat.

“When the earth moves and is broken underneath in a severe earthquake, this event shakes the very physical ground on which people stand along with homes, businesses, hospitals and other structures,” Bishop Fabre said. “We can also feel that our hope has been moved, tossed about or even lost.”

Nesly Rodrigue said one member of the local Haitian community, Chantale Prophete, lost her sister as well as eight nieces and nephews in the earthquake. Rodrigue got news that his family had survived.

New Orleans has an estimated 4,000 Haitians. While several people said they would like to go quickly to the island to help, they have been advised to stay in the United States, marshal financial resources and allow the emergency agencies to handle the search and rescue and early recovery initiatives.

Guillaume said her group’s Christmas visit to Haiti was incredibly successful and was a powerful motivation to help the group keep going with relief efforts. The school and church that the New Orleans group helped build suffered structural damage, but apparently no one was injured.

The priest who runs the parish might have been among the seminarians and clergy killed in the archdiocesan administration building, which collapsed, but he had returned home because he had forgotten his computer, Guillaume said.

The New Orleans group will plan a healing service in the near future. “When you pray, people of faith can hold on better,” she said. “That will be a good thing.”