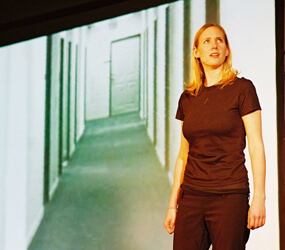 WASHINGTON – A play created by a member of a Minnesota theater company aims to be an alternative to “The Vagina Monologues,” a popular campus play but one that is often criticized for its sexual explicitness.

Jeremy Stanbary of Epiphany Studio Productions says his play, “The Vitae Monologues,” portrays powerful stories of hope and healing from women who have suffered from the psychological and physical effects of abortion.

Stanbary, founder and executive director of the Minneapolis-based Catholic production company, was inspired to write this play a few years ago after hearing women and men speak publicly of their experiences dealing with post-abortion syndrome at a Silent No More event in Minnesota.

Sarah Preissner and Stanbary star in the one-act play designed for performance particularly on college campuses or at high schools.

“These personal and very real testimonies are unfortunately often dismissed by the secular, medical community,” said Stanbary in a telephone interview with Catholic News Service.

“The Vitae Monologues” or “The Monologues of Life” opens with a scene in a therapist’s office, where several people talk about seemingly unrelated problems they’re having in their lives. Each one has experienced trauma in the aftermath of an abortion.

“Oftentimes symptoms don’t appear until years later,” Stanbary said. “Since Roe v. Wade, women have been repressed and ignored, but we’re seeing an influx of women coming forth, telling their stories of post-abortion syndrome – understanding that they are not alone.

“This play gives women a voice within our culture and their stories need to be told,” he added. “The greatest deception is that abortion is good for women and helps women.”

The play tells the stories of women who “bought into this idea that abortion would take away their problems,” said Stanbary.

But Stanbary and Preissner have heard from an increasing number of women and men who say abortion has had severe psychological effects on them, he said.

Post-abortion syndrome, like post-traumatic stress disorder, reveals itself in a variety of ways.

“We touch on many of these problems in the play such as feelings of overwhelming grief, nightmares, thoughts of suicide, lots of anger, denial and suppression of the root problem, depression, anxiety, feelings of unworthiness as a parent, drug and alcohol abuse, increased sexual promiscuity, and self-hatred,” said Stanbary.

“These are real stories from real people,” he added.

Although “The Vitae Monologues” shares with the audience a painful reality of the serious aftermath of abortion, it also offers the message that a place of healing and forgiveness can be found through Jesus Christ.

Many might wonder how “The Vitae Monologues” counters “The Vagina Monologues,” a play that has caused many protests on Catholic campuses and beyond.

“‘The Vitae Monologues’ deals with the more rotten fruits of the radical feminist movement and sexual revolution, which is abortion,” said Stanbary. “Both plays are also meant to be controversial.”

“The Vagina Monologues,” based on interviews with numerous women, is a series of monologues in which women discuss their sexual experiences, including rape and other forms of violence against them.

Many U.S. college groups across the United States sponsor productions of the play in an effort to raise awareness about sexual violence against women and to raise funds for organizations working with physically abused women.

Information about booking Jeremy Stanbary for performances or speaking engagements is available by e-mailing the Maximus Group at: speakers@maximusmg.com, or calling: (678) 990-9032. Tickets for “The Vitae Monologues” may be purchased by calling Sarah Preissner at: (920) 850-5930.