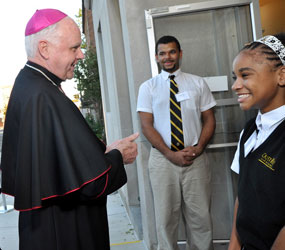 Archbishop Edwin F. O’Brien blessed the $7.4 million Harry and Jeanette Weinberg Academic Center, telling attendees that he hoped it would be a galvanizing force for Cristo Rey and Baltimore City education.

“This is what we’re here for,” the archbishop said in praising the Jesuit order for their belief in urban Catholic education.

Earlier in the day, the archbishop blessed Holy Angels Catholic School, which is serving the west side of Baltimore city.

Cristo Rey, housed inside the former Holy Rosary School in Fells Point, was one of the first places the archbishop visited when he came to Baltimore in 2007. The new academic center is making full use of a former convent at Holy Rosary parish, which is next to Cristo Rey.

The school received $500,000 contributions from The Charles T. Bauer Foundation and Mary Catherine Bunting. A $1.2 million commitment from the Harry and Jeanette Weinberg Foundation is the largest capital gift to a Catholic school ever from that foundation.

“We are deeply grateful to our generous benefactors for their tremendous support of our students – students who through lives of accomplishment and service will help to create a brighter future for themselves and for Baltimore City,” said Jesuit Father John Swope, president of Cristo Rey. “The facility of the Harry and Jeanette Weinberg Academic Center will create an outstanding learning environment for our students as they prepare for college.”

Designed by Rubeling & Associates with construction by Mullan Contracting Company, the three-story brick building is at the corner of Eastern Avenue and Chester Street.

Warm woods and stained-glass windows are some of the highlights of the structure, which features classrooms, a library, computer lab and offices for college counseling, information technology, volunteer coordination and the school’s corporate internship program.

Students at Cristo Rey work several days a month in the business community to help pay for their tuition. Junior James Lambert told attendees that they played a vital role in his future.

“I bring a message to you on behalf of the student body” Lambert said. “We are taking our education seriously. We are learning from you. We are watching how you make things happen. We are taking notes. So, that one day, we will be leaders for Baltimore.