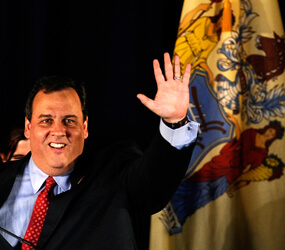 However, there is a wait-and-see attitude about how Christie plans to reduce state spending, especially if it affects programs that serve the poor, such as health care and rental assistance, said Patrick R. Brannigan, executive director of the New Jersey Catholic Conference, the public policy arm of the state’s bishops.

Christie, a Catholic, received 49 percent of the vote to 45 percent for Gov. Jon S. Corzine in the Nov. 3 election.

Brannigan believes Christie’s stance on the same-sex marriage issue was a major factor in helping him get elected.

Christie, who like the Catholic conference feels the current law protecting civil unions is sufficient, believes marriage should be exclusively between one man and one woman. He has promised to veto any bill legalizing same-sex marriage.

Corzine has promised to sign a same-sex marriage bill if he receives one before he leaves office in January. If that happened, Christie said he would seek to give voters an opportunity to overturn it by approving an amendment to the state Constitution.

Catholics in New Jersey also should be encouraged by Christie’s pro-life stances, Brannigan said. The governor-elect supports restrictions that would ban partial-birth abortion and supports laws that would require parental notification when a minor girl seeks an abortion and a 24-hour waiting period before any woman gets an abortion.

Brannigan also believes it is unlikely Christie will seek to bring back the death penalty, which was abolished during the Corzine administration with the support of the Catholic conference. One reason, Brannigan noted, is that carrying out the sentence is too costly.

The bill, which was still being considered in committees as of Nov. 11, would provide scholarships for eligible low-income children to attend participating public or nonpublic schools.

Some of the Catholic conference’s concerns about Christie might not fully surface until he seeks to implement some of his plans to control spending, Brannigan said. The state is facing an estimated $8 billion deficit in next year’s budget.

At a meeting with Ocean County mayors several days after the election, Christie said one of his administration’s early priorities will be to review the efficiency of the state Council on Affordable Housing, according to the Asbury Park Press. He claimed affordable housing obligations cost local taxpayers too much and usually do not result in housing being built.

Brannigan said the conference has “grave concerns about the needs of the poor and people in need who always are in danger when budget cuts are made so that we would want to work hard to make sure those individuals are hurt the least, and Gov. Corzine did a good job on that.”

He added that the conference is committed to the Catholic social principle of preferential option for the poor.

On the issue of comprehensive immigration reform, Christie, a former U.S. attorney for the District of New Jersey, did not articulate a position. However, Christie has stated that being in the U.S. without proper documentation is not a crime but a civil wrong.

Christie also has said undocumented immigrants are not criminals unless they have re-entered the country after being deported. In addition, he has said their cases should be handled by federal authorities.