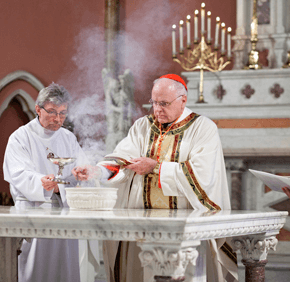 Holy Cross, Federal Hill clergy and parishioners are in awe that the church’s new altar, which they received from another church, perfectly matches the church’s existing high altar.

“It’s a perfect match, it’s unbelievable,” said Father Patrick M. Carrion, pastor of Holy Cross. “The pillars of the altar of sacrifice match the high altar. It almost looks like it was designed for the church.”

Holy Cross celebrated the dedication and installation of their new marble altar at a special Mass May 6 with Cardinal Edwin F. O’Brien, in one of his final acts as Baltimore’s apostolic administrator.

Cardinal O’Brien blessed the altar using holy water, incense and chrism. Parishoners Marge and Jack Vana – who have laundered the church’s altar linens each week since the 1970s – put a linen cloth on the altar during the Mass.

“I didn’t realize there was so much involved in the dedication of the new altar,” said Jack Vana, 73, a parishioner of Holy Cross for nearly 70 years. “It was all very touching.”

This past winter Father Carrion said he learned that items from St. Peter the Apostle, which closed in 2008, would be going to Catholic churches in the Archdiocese of Baltimore and he inquired with the archdiocese about the altar.

Holy Cross is making a monetary donation to Transfiguration Catholic Community, Baltimore – formerly St. Peter’s – for the altar, said Father Carrion, who declined to say how much the donation is for.

The new altar, which is nearly double in size of Holy Cross’ previous wooden altar, weighs about a ton, came to Holy Cross in seven or eight pieces and was erected in the church, Father Carrion said.

Father Carrion said “you can’t orchestrate” the altar being a perfect match for the church and Cardinal O’Brien’s availability for the dedication.

“It was providence,” Father Carrion said.

Dorothy and Donald Wright, parishioners of Holy Cross since 1989, said the dedication of the new altar “was moving.”

“It was like seeing God in all his glory,” said Dorothy Wright, “and to see that the sacrifice of the Mass will happen there every time, it’s like singing extra praises to God.”

Wright said “it was astonishing” that Cardinal O’Brien took the time to celebrate the Mass.

“The only higher person you would have had would have been the pope,” said Wright, 56. “I felt blessed and I felt honored to be there.”

View a slideshow below. Use the arrows to navigate through the photos.