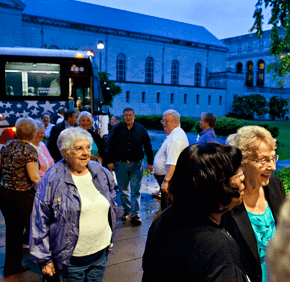 After a 12-hour bus ride, Archbishop William E. Lori’s friends and family arrived at St. Mary’s Seminary and University in Roland Park May 14 looking relieved to be off the road and eager for this week’s pomp and circumstance to begin.

“Everybody is just real excited and feels blessed that is a part of this,” said Freda Jahn, 86, Archbishop Lori’s aunt.

Jahn and nearly 40 family members and friends boarded a coach bus May 14 in southern Indiana and traveled about 600 miles to Baltimore for the May 16 installation of Archbishop Lori as the 16th archbishop of Baltimore at the Cathedral of Mary Our Queen, Homeland.

This is the third bus trip Jahn has planned since 1995 to see Archbishop Lori ordained as an auxiliary or installed in a diocese.

Sulpician Father Thomas R. Hurst, the seminary’s president rector and vice chancellor of the ecclesiastical theological faculty, greeted the group during dinner May 14 at the seminary, where the pilgrims are staying.

“I call him Bill,” said Jahn, whose response was met with laughter.

This is the third trip Angela and Tom Hayes, friends of Archbishop Lori’s parents, have made by bus for him.

“I think it’s just a great honor, I really do,” Tom Hayes said of the trip. “We’re more than happy to go to be supportive of Frank and Margaret (Archbishop Lori’s parents). It’s a great honor to be invited.”

Before a May 15 dinner at The Tremont and the Vespers service at the Basilica of the National Shrine of the Assumption of the Blessed Virgin Mary in Baltimore, the group was to spend the day in Washington, D.C.

They will attend the May 16 installation at the Cathedral of Mary Our Queen and a dinner that evening at the Baltimore Marriott Waterfront. They leave Baltimore for Indiana May 17.

Phyllis and Robert Burkholder, friends of Archbishop Lori’s parents, also traveled to Baltimore on the bus.

“He is very reverent,” said Phyllis Burkholder, 65, of Borden, Ind. “He likes things to be as orthodox as they should be. He is one who is willing to abide by what the pope says, and what the rules and regulations are and helps everyone grow in their faith.”

“He’s not way over our heads or way beneath us,” said Robert Burkholder, 66. “He can just relate to people very well.”

Rose Bowman, 88, of Clarksville, Ind., another aunt of Archbishop Lori, said her doctor advised her not to make the trip because of health concerns, but she decided to travel anyway.

“I wouldn’t miss it,” said Bowman, who choked back tears of joy. “I think it’s one of the best things that’s ever happened in our family. It’s just an honor.”

David Bowman, Archbishop Lori’s cousin, said he remembers being a kid, going into his cousin’s room and seeing books about Franklin Delano Roosevelt lined up.

Norvetta Bartley, 63, Archbishop Lori’s cousin and another veteran of all three bus excursions, is confident Archbishop Lori will one day be elevated to a cardinal.

“We’re already saving for Rome,” said Bartley of New Albany, Ind. “When he became bishop, I said ‘that’s how we’re going back to Rome.’”