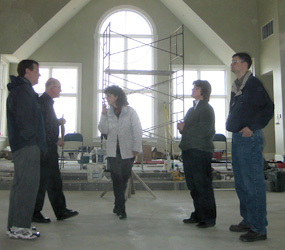 From the church’s lofty hilltop perch, the smiling parishioners saw a majestic ridge of mountains in the distance, patches of woodlands and a panoramic view of the Casselman Valley below.

It was a far cry from anything they could glimpse from their former church – an almost windowless structure that was razed in 2008 after being severely damaged in a Dec. 23, 2006 fire. The new building is being built on the same site in Garrett County.

“This is really amazing,” marveled David Rawe, a member of the parish building committee. “The old church was so dark and dank. Now, we feel truly called out of darkness.”

Parishioners hope to move into the structure in late April. Archbishop Edwin F. O’Brien will dedicate it May 3.

“Everyone is excited about it because it’s going to look like a real church,” said Camilla Rawe, another member of the building committee. “It’s beautiful.”

Father James Hannon, pastor of St. Ann and five other churches in Western Maryland, said he has heard that some Catholics who have been away from the church intend to return once the new building is finished.

“Grantsville is a close-knit area and many of the people know each other,” Father Hannon said. “Neighbors from other churches have told parishioners how beautiful the church looks. They are excited for us.”

Visible from Interstate 68, the new church will be topped with a cross. It features large windows on three sides of the building that flood the interior with natural light.

Above the altar will be a large, flat-panel crucifix that will include paintings of the old St. Ann in Avilton and St. Stephen in Grantsville – two faith communities that were combined in the 1970s to form St. Ann, Grantsville.

“The old church did not have a high, vaulted ceiling,” Father James Hannon explained. “The new church will have a lovely architectural lift inside and out.”

The new church will seat about 290 people – 140 more than the former church. It will also include a basement for social functions and an outdoor courtyard area.

According to Mike Root, a member of the building committee, the 100-family parish has retained a strong sense of community despite being without a home for more than two years while the building was under construction.

Masses have been celebrated at nearby Newman Funeral Home.

The new church will cost approximately $1.8 million, most of which is being covered by fire insurance money. Parishioners have also raised $80,000 in pledges, Father Hannon said.

DCMM Architects of Gaithersburg and Eads Architects of Cumberland worked on the design of the church. Daystar Builders Inc. of Grantsville was the builder.

The pastor said he is grateful to his parishioners, archdiocesan officials and Dirk Yoder, president of Daystar Builders.

“Many of the workers who put time and effort into this beautiful structure will have the blessing of seeing their good work for years to come,” he said.
Watch a video report on the new church at St. Ann, Grantsville.