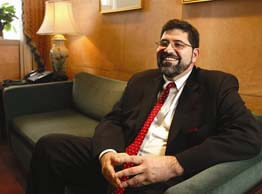 On his first day of school in the United States in December 1969, Dr. Andres Antonio Alonso got lost. Curiosity led the Cuban immigrant away from the safety of the schoolyard and into unfamiliar territory in his new Union City, N.J., neighborhood.
Although he had no money and did not speak the language, the child was unafraid as he used an old water tower to navigate his way home.
Decades later, some in Baltimore say the city’s public schools have lost their way. They are looking to Dr. Alonso, the newly appointed chief executive officer for the city public school system, to help guide them in turning around a system facing a laundry list of challenges.
With a sturdy, 6-foot-1 frame, Dr. Alonso projects a sense of confidence. He believes it is possible to make big changes in Baltimore and has already eagerly set out to achieve the goal – holding community meetings, interacting with parents and readily sharing his commitment and views with the public.
“The wonder of this country, and it’s a wonder that I’ve certainly benefited from, is this idea of if you can dream it, you can make it happen,” said the dark-haired, bearded educator, adding that he sees extraordinary possibility in every child.
A Columbia University and Harvard Law School graduate who has 20 years of educational experience under his belt, Dr. Alonso said he plans to visit city schools on a regular basis.
Growing up in a small town in central Cuba with his parents and two younger brothers and sister, Dr. Alonso said his Catholic church, “La Iglesia de la Ascension” (the Church of the Ascension) played a central role in their lives.
“It was a place in town where all the kids went,” he said. “Even when there was nothing going on, we could go there and play.”
Because the communist Cuban government did not espouse religious faith in the 1960s, Dr. Alonso said it became increasingly difficult to find the church open, as there were not enough priests in the country and the seminary had closed.
“The change was difficult and many families that were part of the parish were leaving the country,” he said.
The Alonso family was among many who headed to a Cuban-American enclave in Union City, N.J., where they joined St. Augustine Church.
Arriving in the country at the age of 12, Dr. Alonso marveled at the architecture, people and abundance of the United States. As a youngster, he had a paper route and worked for a dry cleaner before heading off to Columbia University.
After graduating from Harvard Law School and working for a New York law firm, Dr. Alonso pursued a career in education. He also earned a master’s degree in education from Harvard.
While working at a school for emotionally disturbed adolescents, he became the legal guardian for a student and helped him continue his education.
“Because of the trust of his mom and my commitment to make this work, I think it was very much the right thing to do for him, said Dr. Alonso, noting that he continues to have a great relationship with the young man, who is now 32.
With four years of experience in the New York City Department of Education, most recently supervising some 100 superintendents leading 1,100 schools, Dr. Alonso said he feels prepared to guide Baltimore’s 180 schools to success.
“Clearly sustainable progress in the city has been difficult to achieve, and there’s an opportunity to make the schools into the lifeblood of the city, the way in which it should be,” said Dr. Alonso, who is temporarily residing in a furnished town home in Otterbein and has not yet had a chance to select a parish. “As beautiful as the city is, as much as certain areas are thriving, the city will never reach its potential until the schools are functioning on all four cylinders and until parents feel every neighborhood school is a place where they can send their kids.”
The 50-year-old educational leader, who says having a sense of humor is part of what makes the day “joyful” for him, said it’s clear that “in every school there’s a great teacher.”
“Even in schools where we think children are not getting a great education, you can walk into a classroom and marvel at what you see,” he said. “So if it happens in one classroom, it can happen in others. If it can happen in one school, then what’s the justification for it not happening in others? It doesn’t mean it’s easy, it doesn’t mean it doesn’t take extraordinary effort, but it’s doable.”
Saying it’s important for the Baltimore school system to work collaboratively with any organization helping children in the city, Dr. Alonso said he plans to meet with Dr. Ronald J. Valenti, superintendent for the Archdiocese of Baltimore.
“Maybe I can learn something from the archdiocese and maybe they can learn something from me,” he said.