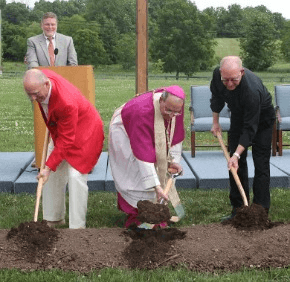 With a May 31 ground-breaking ceremony completed and construction scheduled to begin in July, parishioners of St. Katharine Drexel in Frederick are that much closer to having a church of their own.

The 19,000 square-foot church – which will be completed over 12 months if all goes to plan – will be located on the northeast corner of the property on which St. John Regional Catholic School, 8414 Opossumtown Pike on the north side of Frederick, is located.

When completed, the church will accommodate up to 700 worshippers. Additionally, the building will house a gathering space with a café and information center, multi-purpose space, restrooms, various sacristies and other auxiliary spaces.

Three rooms will be specifically dedicated to children’s ministries during weekend Masses, and a large outdoor plaza and additional parking are also part of the project, which is being managed by Douglas Johnson, a capital project manager for the archdiocesan Division of Facilities and Real Estate Management.

The stained-glass windows for the new church are being repurposed from the former St. Martin Church, located on Fulton Ave. in Baltimore, which was to be purchased by Bon Secours Hospital to be converted into a community health and wellness center, as previously reported by the Catholic Review.

“It’s a modern design in terms of layout, but will have arches, stained-glass windows and pillars,” he explained, adding that the exterior masonry materials have not yet been chosen.

“We were striving to create a different church style compared to others in Frederick County,” Father Boisvert said.

St. Katharine Drexel’s history began in 1998, when Father Boisvert was assigned to look into establishing a new parish to accommodate overflow from St. John the Evangelist, located in downtown Frederick. What began as an unnamed mission of St. John the Evangelist – 200 faithful were meeting inside the theater at Frederick Community College – was officially named St. Katharine Drexel in 2000.

The Philadelphia-born nun, founder of the Sisters of the Blessed Sacrament, was known for her outreach to African-Americans and Native Americans. Father Boisvert’s parish has a special ministry to African immigrants.

“(St. Katharine Drexel’s) name jumped to the top,” he said.

In 2003, the mission was officially designated its own parish, and in 2005, its liturgies were moved to the multipurpose room of St. John Regional Catholic School, which had opened that year.

Two successful capital campaigns, launched by the parish in 2008 and 2012, secured $2 million and $1.85 million, respectively, for the $6.5 million church building, designed by Noelker and Hull Associates and to be built by Conewago Enterprises, according to Father Boisvert.

With another campaign coming, St. Katharine Drexel “has raised or will raise” the up-front funding necessary to keep the mortgage down to 35 percent of the cost of the project, Father Boisvert said, adding that the parish will then pay off that mortgage with funds from regular collections.

St. Katharine Drexel, which currently has 13 staff members and almost 900 families won’t be the only new church in the Frederick area. In May 2014, St. Joseph-on-Carrollton Manor in Buckeystown dedicated a new church with a capacity of 500, long after the parish had outgrown the 1871-built church on the property.

Both projects are, at least in part, responses to population growth fueled by the I-270 biotech corridor between Frederick County and Washington, D.C.

The largest demographic in that influx is 20- to 44-year-olds.

‘All made in God’s image’: Frederick L’Arche events bring together those with and without disabilities