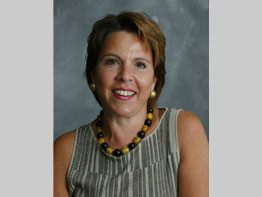 Barbara Bozzuto lost her way on her first visit to St. Agnes Hospital, which led to a satisfying discovery.

“I came on board in 2002, and got lost the very first time I walked in,” Mrs. Bozzuto said. “A maintenance worker asked, ‘Can I help you?’ He started giving me directions, then stopped and said, ‘I’ll show you.’ Up the elevator, down the hall we went.

“I said to myself, ‘This doesn’t happen in too many institutions. I was sold at that very moment.”

Mrs. Bozzuto related that introduction a few days prior to her Aug. 18 installation as chair of the board of directors at the hospital in southwest Baltimore, where she succeeded Albert “Skip” Counselman.

Mrs. Bozzuto is a philanthropic fixture in Baltimore and a parishioner of the Cathedral of Mary Our Queen, Homeland. Her background in marketing and communications figures to be of value as St. Agnes sharpens its brand, raises $25 million in a capital campaign and completes $212 million in improvements.

When her appointment was announced in June, Mr. Counselman said that Mrs. Bozzuto “challenges us to stretch our minds and our goals.”

What did he mean by that?

“I was on the board for three years before anyone asked me for money,” Mrs. Bozzuto said. “I finally said to Skip, ‘Don’t you want some money from me?’ We started from ground zero on fundraising.”

That included some of the first-ever appeals to physicians and other staff at St. Agnes, which employs 2,987. Asked about the hospital’s calling cards, Mrs. Bozzuto mentioned the busiest bariatric unit in Maryland and its breast center.

“It seems like a simple concept, but we were the first (in Baltimore) to get all those people together in a room for her and advise her on every aspect of her care.”

Mrs. Bozzuto said that St. Agnes needs to do a better job of promoting itself.

“It amazed me when I learned of all the technology and experts we have, because people don’t know we’re here,” Mrs. Bozzuto said. “We’re more than a community hospital.”

She described details of a $212 million renovation, which will include the construction of two parking garages and a patient tower with 120 private rooms.

A native of Connecticut whose husband, Tom, is a developer, Mrs. Bozzuto majored in English literature in college and describes herself as a “generalist.”

“I have no overwhelming credentials that make me suited for this job,” Mrs. Bozzuto said of her volunteer position, “except for a love of the institution and a vision to want to move it forward and continue the good work that has been done here for 146 years.

“I’m not running the hospital, Bonnie is.”

That would be Bonnie Phipps, a Baltimore native who is the president and chief executive officer at St. Agnes.

Sister Ellen LaCapria, D.C., the vice president of mission integration, continues the presence of the Daughters of Charity, who founded St. Agnes in 1862.

“Women always ran this hospital,” Mrs. Bozzuto said. “Having a woman CEO and a woman chairman of the board and a woman as president of the foundation would not look unusual to the Daughters.”