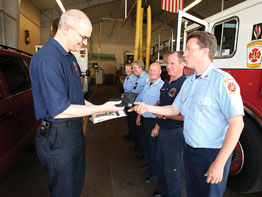 When then Minneapolis Fire Chief James Clack arrived on the scene of last year’s I-35W bridge collapse, he had a hard time believing it was real.

Peering down on the frenzied scene from a neighboring bridge overlooking the Mississippi River, the tall and lanky veteran firefighter was stunned that a quarter-mile stretch of bridge had been reduced to jumbled piles of rubble.

Flames engulfed some cars. Mangled steel, concrete and rebar jutted from the murky water. At least 50 vehicles carrying dozens of rush-hour commuters were plunged 60 feet into the swiftly flowing river.

“It was almost like a Hollywood movie set,” remembered Chief Clack, now the newly appointed chief of the Baltimore City Fire Department who began his position in April and was sworn in at City Hall May 14.

“It was the most incredible thing I’d ever seen in my career,” he said. “There were tremendous opportunities for people to get hurt trying to help others.”

As the unified incident commander overseeing rescue operations, Chief Clack was in charge of making sure hundreds of agencies worked together.

By paying attention to safety and maintaining a steady hand in his management of the disaster, Chief Clack won a lot of credit for preventing a dire situation from getting worse. Thirteen people died and about 100 were wounded in the collapse – far fewer than had been initially expected.

With Baltimore’s fire department still reeling from last year’s death of a cadet in a training exercise and other incidents concerning safety, many are looking to the new chief to demonstrate the same confident leadership he showed in Minneapolis.

In an interview with The Catholic Review, Chief Clack said he knows what the expectations are. He pledged to make safety his number one priority and promised to find ways to increase diversity in the department and to address other concerns.

A convert to the Catholic faith and a permanent deacon ordained for the Diocese of St. Cloud, Minn., the 47-year-old chief believes his faith will help him meet his new challenges in Baltimore.

Although born in the far reaches of northwestern Minnesota, Chief Clack spent his childhood and teen years in California where his family relocated soon after
his birth.

His father operated a 160-acre plum farm near Fresno and sold heavy construction equipment. His mother had been a basketball player on an all-women’s team modeled on the Harlem Globetrotters. She toured Minnesota in the 1940s playing professional men’s teams.

Sitting in his modest office in the unassuming mezzanine of the Baltimore City Fire Department headquarters near City Hall, Chief Clack credited his parents for quite suddenly laying the groundwork for his faith development when he was 12.

It happened one day at the kitchen table, where he and his four younger siblings were eating fried chicken and, as usual, he said, “raising hell.”

His fallen-away Lutheran mother turned to his agnostic father and announced that it was time to “get these kids into church,” Chief Clack recalled.

Since his father had grown up in Utah, he knew Mormons had strong youth programs. So, after some lessons in the faith from Mormon missionaries, the Clack children and their mother were baptized into the Church of Jesus Christ of Latter-day Saints.

With the genes of a basketball player firmly imbedded in his 6-foot-6-inch frame, Chief Clack went on to play basketball for the University of Minnesota, Crookston, an NCAA Division II institution. It was there that he started attending Mass with his Catholic roommate rather than drive 100 miles to the nearest Mormon temple.

The future fire chief said he fell in love with the Catholic Church, attracted by the richness of the liturgy and the solid structure of the church. There was a sense of authenticity he longed for, he said.

After completing Rite of Christian Initiation of Adults and joining the Catholic Church while still in college, Chief Clack married Rose Marie, his Catholic sweetheart, in 1981. He slowly became more active in his parish, lectoring and serving as an extraordinary minister of Holy Communion. Chief Clack went through several years of diaconal formation before his 2004 ordination.

In his 22 years in the Minneapolis Fire Department, Chief Clack often depended on his Catholic faith to get him through stresses on the job. He has delivered babies and held the hands of dying people.

“It’s really a grace to be allowed to be at those things,” said Chief Clack. “You see the whole scope of life from beginning to end and everything in between.”

The bridge collapse was one of those moments when he keenly felt God’s presence, he said.

“That whole situation just increased my faith in God,” said Chief Clack, who always carries a prayer card with the image of St. Florian, patron saint of firefighters, in his right shirt pocket. “The outcome was a miracle.”

Since his arrival in Baltimore, Chief Clack has toured a variety of firehouses – talking to firefighters and having dinner with them. He hopes to get to know all 1,700 firefighters in the department. In Minneapolis, he knew the names all 450 firefighters.

Part of the reason he believes he was successful in Minnesota was his focus on establishing relationships.

“When that bridge collapsed, I had the cell number of every major player in emergency response in Minnesota on my waist,” he said. “I was able to talk to the sheriff, the police chief, the department of public safety, our emergency manager and our mayor within the first few minutes.”

Baltimore firefighters have told him they “really want to get back to feeling pride in service to the citizens of Baltimore,” said Chief Clack, a father of three grown children.

The unfailingly polite chief, who addressed a visitor with a stream of “yes, sirs” and “no, sirs,” has already gone on several fire calls to observe his force in action.

“They’re very aggressive firefighters, which is what I like,” he said. “We need to slow them down a little en route to fires and make them wear their seatbelts and be a little safer. But once they’re there, they’re doing a superb job of service to the citizens.”

The chief is already implementing a plan to adapt a shift-commander model in Baltimore that will put a division chief in charge of operations at all times. It’s a deployment move that will better ensure safety, he said. He has also sent out strict orders for all personnel to wear their seatbelts and protective equipment.

“This is a dangerous profession,” he said. “I want to make sure we’re always doing everything we can to watch out for each other.”

“I love to take ideas and have lots of brains working on perfecting them – which is maybe a little bit different style than folks in Baltimore are used to,” said Chief Clack, referring to Baltimore as a “much more political city than Minneapolis.”

Addressing concerns that the fire service does not reflect the city’s cultural diversity, the chief is studying ways of making improvements. He is coming from a city that was much less diverse than Baltimore, but whose fire service was lauded for its diverse
makeup.

“I believe in giving preference to people who live in the city and for people who have served in the armed forces,” said Chief Clack.

Mayor Sheila Dixon, the woman who picked Chief Clack for Baltimore, told The Catholic Review her choice is “the best person in the country” for the job.

The new chief’s strong foundation in faith will be an asset, she said.

“He’ll have that as a source of strength to draw on,” she said.

Noting that the fire department has suffered a “rocky year,” Mayor Dixon said she is very confident Chief Clack will address safety in the department.

“Come back and talk to him in 30 days, and I think he will have made significant improvements,” she said.

Chief Clack and his wife, who live on North Calvert Street, are still looking for a permanent parish in the city. The deacon is also looking forward to meeting Archbishop Edwin F. O’Brien and plans to request faculties to function as a deacon in the Baltimore archdiocese. Because his family intends to return to Minnesota after he completes his service in Baltimore, he will not request to be incardinated into the Baltimore archdiocese.

“I want to find out what is really needed here,” he said. “I’ll offer to do whatever the archbishop needs.”

After a long and successful career in Minnesota, Chief Clack acknowledged that it was bittersweet leaving his home state. But the chance to lead the fire service in Baltimore was an opportunity he couldn’t resist, he said.

“I just love this area,” he said. “I’m very proud to be the fire chief, and I look forward to serving as long as the mayor will let me.”