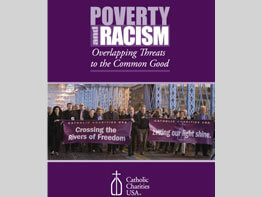 WASHINGTON – As part of its continuing nationwide campaign to cut poverty in half by 2020, Catholic Charities USA is ramping up efforts to help people understand the ties between poverty and racism.

The Alexandria, Va.-based agency is utilizing the Internet, prayer and a study guide to help Catholics open meaningful discussions on how better to address the needs of the poor, especially in minority communities, and take action to reduce the incidence of poverty locally.

“We’re showing how blacks are overrepresented in the poor,” Father Williams explained. “We’re trying to reach those who think they have no affinity for the poor because they don’t know them.”

Building on its 2008 paper, “Poverty and Racism: Overlapping Threats to the Common Good,” Catholic Charities introduced a section on its Web site Jan. 15 that will help parishes, prayer groups and study circles open the conversation about race and poverty.

Called “E Pluribus Unum,” the online resource offers discussion points, prayer and Scripture readings that parallel the eight sections in the paper. Topics covered include racism and the challenge to Christian faith, the reality of economic privilege and confronting racism to eliminate poverty.

Introduced on the 80th anniversary of the birth of the Rev. Martin Luther King Jr., the section can be accessed from the agency’s main Web site at www.catholiccharitiesusa.org.

Catholic Charities officials and representatives of the U.S. Conference of Catholic Bishops also took their message to Capitol Hill Jan. 15. In a briefing with Senate staff members, they outlined the difficulties nonprofit agencies, including local Catholic Charities programs, are facing as growing numbers of people from all backgrounds seek assistance with food, mortgage and utility payments, and clothing.

“We’ve been carrying the water in caring for the poor and now there’s a big hole in our buckets,” Father Williams added.

Ralph McCloud, director of the U.S. bishop’s Catholic Campaign for Human Development, was part of the delegation and said he urged members of Congress to help people living on the “back street” as much as they are aiding the middle class during the current deepening recession.

“When the rest of the country is having sniffles, these communities have pneumonia,” McCloud said.

“Pulling them in is going to be more difficult than anyone else. It has to become, to use Catholic social teaching, a preferential option toward finding the folks, identifying what their needs are, making sure they’re participating in the economy, making sure their wants, needs, desires are part of whatever legislation that gets crafted in the stimulus package,” he said.