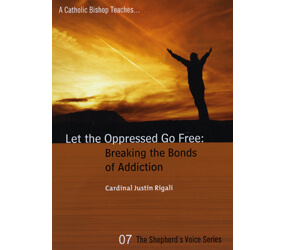 PHILADELPHIA – How prevalent is addiction? Can people overcome addictions through willpower alone? How important are prayer and the sacraments for overcoming addictions?

Cardinal Justin Rigali of Philadelphia spoke about these issues during an interview with The Catholic Standard & Times, Philadelphia archdiocesan newspaper, on his new book, “Let the Oppressed Go Free: Breaking the Bonds of Addiction.” The 80-page soft-cover book is the seventh in the Shepherd’s Voice Series from Dallas-based Basilica Press.

Each volume, priced at $5.95, is in question-and-answer format and written by a bishop, archbishop or cardinal. Previous topics have included marriage, immigration, end-of-life issues and vocations.

“I found (the Q-and-A format) quite satisfactory,” Cardinal Rigali said. “The text itself could be quite precise because the questions were precise. That way we got around excessive generalities. The formula is something like the Baltimore Catechism; there is something to be said about that.”

He chose the topic in consultation with Basilica Press, the cardinal said.

“This is something that is very relevant and useful, and I was hoping by writing it I could make a contribution that could help people in their lives,” he said. “I’ll be very pleased if it will get into the hands of people it will help or those who will help them.”

Although the cardinal’s book cites such traditional addictions as alcohol and drugs, others he mentions – online shopping and cyberpornography, for example – didn’t exist a decade or two ago. Is today’s environment more conducive to addictive behavior than in the past?

“I believe today’s environment is much more challenging,” the cardinal said. “Technology, for its many blessings, does present special difficulties. In that sense you can say the environment is more conducive to addictive behavior.”

As addiction is acquired, he said, “freedom is wounded.” It is important to try to ward off addiction long before it takes place because once it takes hold free will is gone, he added.

Addiction, he said, “actually leads to slavery, and in doing so we have tremendous violence done to one of our greatest gifts, which is the gift of free will.”

In the book the cardinal advocates the use of spiritual advisers, prayer and the sacraments of penance and the Eucharist for those fighting addictions.

“Prayer is extremely important in overcoming addiction and avoiding addiction to begin with,” he said. “For those who are in the household of our faith, penance and Eucharist are so important. Their value, their power, can never be overestimated.”

Alan Napleton, president and CEO of Basilica Press, said the initial press run was 18,000 copies, “which is the largest so far in the series.”

Cardinal Rigali’s book is available for $5.95 through Basilica Press’ distributor, Catholic Word, by phoning (800) 932-3826; through the Web site www.basilicapress.com; or through religious bookstores.