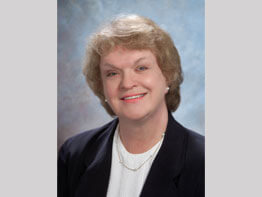 Raised a Baptist, Nielsen achieved the first goal shortly after she started college at West Virginia University in Morgantown. It was more than a decade and five children later that she entered medical school and started down the path that led to her inauguration June 17 as the 163rd president – and the second woman president – of the American Medical Association.

In a telephone interview with Catholic News Service June 19, Nielsen said she wasn’t sure what put the strong desire to be a Catholic in her mind at such a young age, except perhaps some neighbors she liked who were Catholic. The priest in her West Virginia hometown said she was too young to change her religion so she bided her time until she entered college.

She also spent three years in an Ursuline convent but decided at age 21 that the order’s primary charism of teaching conflicted with her other “calling” – to be a doctor.

Nielsen, who also holds a doctorate in microbiology from The Catholic University of America in Washington, received her medical degree from the University of Buffalo, N.Y., in 1976. Between Catholic University and medical school, she worked as chairman of the biology department at D’Youville College in Buffalo, then run by the Grey Nuns of the Sacred Heart.

A board-certified internist, she now serves as senior associate dean for medical education at the School of Medicine and Biomedical Sciences at the University of Buffalo. She worships at St. Joseph University Church in Buffalo.

Within the AMA Nielsen has helped to develop policy on such issues as alcoholism among women, colorectal cancer screening and safety in dispensing prescriptions. But the issue that she has chosen as central to her yearlong term as AMA president is helping the nation’s 47 million uninsured.

“I really think this is the year we reach the tipping point,” she told CNS. “With a new president and a new Congress” next year, she believes the nation will come together in a commitment to provide health insurance coverage for everyone.

“The fight will be on how to finance it,” Nielsen said. The AMA plan, outlined at www.voicefortheuninsured.org, would shift some government funds currently used to subsidize employee-based health plans to tax credits or vouchers for low-income Americans, whether employed or unemployed.

In her inaugural address as AMA president, Nielsen urged the medical community to be a bridge uniting various constituencies on health care reform.

“I’m convinced there is an important analogy between bridges that distribute powerful forces, withstand high winds and stormy weather and provide safe passage across a chasm, on the one hand, and our opportunity to change the American health care system on the other,” she said.

“Instead of lurching inevitably toward government control in the current poisonous – partisan – atmosphere, we could craft all sorts of choices,” Nielsen added in her June 17 talk. “But we must work together to build that bridge with the goals of coverage and choice, combined with care and compassion.”

Nielsen had been involved in leadership posts with the AMA since 2000, serving for four years as speaker of the House of Delegates and three years as vice speaker.

She was president-elect last year, “and if you survive that they let you be president,” she said with a laugh. Next year she will continue in AMA leadership as immediate past president.

Nielsen said she does not see any conflict between her position at the AMA and Catholic teachings.

“The AMA has been very careful to stay out of issues like abortion,” she said. At the same time, the AMA code of ethics reflects some “strongly held beliefs” in line with church teachings, she added, citing the code’s prohibition on physicians being involved in executions and its ban on physician-assisted suicide.