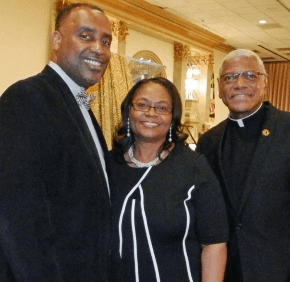 By Karen Sampson Hoffman
Special to the Review
WOODLAWN – Renard and Stephanie Baker of New All Saints Church have seen the richness of their marriage expand beyond their family to the young people of their congregation’s youth ministry.
“We always keep an open door for them,” said Renard Baker, director of the youth ministry program at the Liberty Heights parish. “To help them grow in life, in their spirituality and professionally.”
The Bakers received the Leadership Award for contributions to New All Saints during the 20th Annual Mother Mary Lange, O.S.P. Awards banquet Feb. 10 at Martin’s West in Woodlawn. They were among nearly 40 individuals honored from 13 parishes in Baltimore City.
Renard Baker has collaborated with the parish’s religious education program to plan its annual graduation Mass. Stephanie is involved with the healthcare committee and has led the Healthcare Committee Scholarship program.
The Bakers have two children, and have opened their home and lives to youth group members for 18 years. They have former members return during college breaks and join as congregation members with their own families.
“It’s like raising more kids,” Renard Baker said. “It allows us to take the same philosophy and beliefs with our kids, and carry those over to the youth group. We have that connection with the kids. There are days we come home and there’s kids in the house.”
“It’s great when you see them bring their families back and want to be part of the legacy of the church,” Stephanie Baker said.
Youth group members see them as a husband and wife, Stephanie Baker said, facing the challenges of marriage as a way of living and working with others. Communicating and persevering together are examples they share with youth group members.
“We try to walk the walk,” Stephanie Baker said. “It’s challenging but it’s the life. It’s what makes you stronger. Be here, straight forward with each other. You have to speak to the person. You work things out. It’s all part of your marriage. I think as long as you keep (God) in the forefront, as we try to do with our marriage, things will work out.”
The New All Saints honorees, in Service Award, included another couple, Janice Curtis Greene and Paris Wendell Greene, who have been married 42 years. Janice Green, a griot, an oral tradition storyteller, portrayed Mother Lange during the opening ceremony.
Awardees are selected by their parishes, said Sister of Notre Dame de Namur Gwynette Proctor, director of the Office of Black Catholic Ministries for the Archdiocese of Baltimore.
“These are trailblazers in their communities,” Sister Gwynette said. “They continue to choose and serve their churches and their community. We placed it (the event) in Black History Month intentionally because Mother Lange is one of our pioneers.”
The banquet honors Mother Mary Lange, a Caribbean immigrant who taught African-American children in Baltimore. In 1829, she founded the Oblate Sisters of Providence, the first religious order of African American women.
“Mother Lange’s story is our story, even right now,” Sister Gwynette said. “There’s so many men and women in this room who are pioneers in their fields, so that black people are accepted in their fields. It’s here, tonight, where we are no longer invisible in our church. We’re strengthening Baltimore and the archdiocese.”
The Bakers said they felt humbled by their congregation’s nomination.
“I think we’re blessed by God to be in this position,” Stephanie Baker said. “It’s really an honor for us to be nominated for this award.”
“I don’t look for rewards,” Renard Baker said. “As long as I’m successful with the kids. We humble ourselves knowing what we’re doing for the kids. Recognition is just a bonus.”
Bishop Denis J. Madden, auxiliary bishop emeritus of Baltimore, praised the honorees for their work.
“You bring down and call down from God many blessings on us,” Bishop Madden said. “We are truly blessed to live in the time of Pope Francis, who lays out for us what it is to be a Christian. We see it in our city: brother and sister working arm in arm. This is what you all do. You are the blessed ones who bring the Word of God to all you meet.”
The following were honored at the Mother Lange Awards Banquet, in order, in the leadership, service and youth categories, unless otherwise noted. All parishes listed are in Baltimore City.
St. Ambrose: Oblate Sister of Providence Mary Stephen Beauford, Perthean Toins-Banks and Chimaobi Eric Azike
St. Ann: Brian Cousin, Quawandra L. Brown, no youth recipient
St. Bernardine: Dorothy Martin-Delly, Rosalie Melvin, Amanda McDonald
Blessed Sacrament: Gayner Bosworth, Carlene Yearwood, Javaughn Harris
St. Cecilia: Charles Dorsey III, Jaiedra E. Wicks, Rafael Smith
St. Edward: Davida R. Jones-Manns, Ava Brown, Connie LaBoard, Kourtney Pryor
St. Francis Xavier:  Joslyn Brown Alexander, Michael W. Allen, Candre Henry
St. Gregory the Great: Roxanne Pattillo, Cynthia Colston, Maria Virginie Pattillo
Immaculate Conception:  Margaret Jones, Tameka Deans, Zachary Prentiss Sharp
St. Mary of the Assumption: Pamela Beams, Justin Beams, Gersomina de Freitas
New All Saints: Renard and Stephanie Baker (leadership), Paris and Janice Curtis Greene (service), Amiya Jefferson
St. Peter Claver and St. Pius V: Sandra Jackson, Eunice Thompson, both for service
St. Wenceslaus: Antoinette M. Shannon, Gloria Barber, Richard J. Shannon