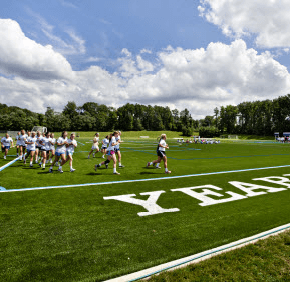 TOWSON – Notre Dame Preparatory School’s new turf field, which school leaders call a labor of love, has been completed and is in use.

Yeardley Love Field, which honors NDP alumna Yeardley Love who was killed in May 2010, will be dedicated and blessed Sept. 9 at NDP.

“She spent a lot of time at Notre Dame on the field,” said Sister Patricia, who called the new athletic facility “the field that love built.”

“A lot of love went into this field,” Sister Patricia said. “It’s not just a turf field to play on.”

Love was found dead in her Charlottesville, Va., apartment two weeks before she was to graduate from the University of Virginia.

Love’s ex-boyfriend, George Huguely V, 24, of Chevy Chase, was found guilty by a Virginia jury Feb. 22 of second-degree murder and grand larceny in her death. Court testimony included that Huguely was reportedly drinking alcohol for more than 12 hours the day Love died. Both were lacrosse players at Virginia.

Huguely was sentenced Aug. 30 to 23 years in prison in a Charlottesville, Va. courthouse.

The $1.2 million field was financed through fundraising, NDP and One Love Foundation, the nonprofit founded in Love’s memory, Sister Patricia said.

The idea for the new field came about shortly after Love’s death, Sister Patricia said. Construction began in May and was completed in August.

Lines on the field are accented with two shades of blue, Love’s Class of 2006 colors at NDP.

Physical education classes will use the field, in addition to student athletes who play field hockey, lacrosse and soccer, said Mary Bartel, an NDP lacrosse coach who coached Love. The previous field was grass.

“Every single time we step on it, we’ll be reminded of her,” Bartel said. “She was an outstanding athlete.”

Sharon Robinson, Love’s cousin, an NDP alumna and family spokeswoman, said Love “was somebody who lived for others. She would be surprised that we were doing all of this for her.”

“(NDP) really was a place that she loved and being a student athlete was a big part of her life,” Robinson said. “It’s quite a tribute.”