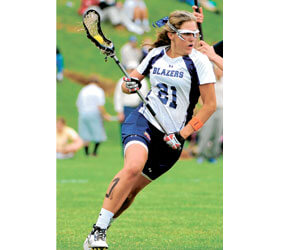 Covie Stanwick was born into a lacrosse legacy, but she’s carving out her own identity in the sport – and in life.

The Notre Dame Preparatory School senior’s grandfather, Tad Stanwick, wrote the first book on the 10-man game, aptly titled “Lacrosse.” Brothers Ted and Steele starred in high school and college. Brother Wells, now playing at Boys’ Latin, is ranked by Inside Lacrosse as one of the top three players in the country. Three sisters – Sheehan, Wick and Coco – all went to NDP and played at Georgetown University.

Covie, 18, is bucking the trend set by the Stanwick women. Ranked the top player in the country by Inside Lacrosse, she will play next season at Boston College.

“I wasn’t threatened by going to Georgetown,” Covie said. “It’s a different opportunity at Boston College. They’re a program on the rise. My sisters were all really supportive. They all wanted me to go where I’m comfortable.”

Covie is a parishioner of Cathedral of Mary Our Queen in Homeland and attended its parish school. She played lacrosse for various recreation and club lacrosse teams growing up and, like her sisters, on attack.

Covie made the NDP varsity as a freshman and quickly asserted herself as a leader.

“Coming from such a big family, you have to have a big personality,” Covie said. “Once you get on the team at Notre Dame Prep, everyone just accepts you.”

The sensation of scoring a goal and applying pressure on opposing defenses never gets old for Covie, who accumulated 78 goals and 58 assists last season.

“I think it’s fun to have control over the game,” she said. “I really do love lacrosse.”

She says she gives simple advice to younger players at NDP.

“Definitely use all the advice you get and listen to your coaches,” she often says.

Covie has a 3.4 grade point average and is a member of the school’s athletic association. As part of that group, she has helped organize the school’s renowned Gym Meet. She also was a starter on the school’s basketball team and ran cross country during her freshman and sophomore years.

The school is a special place for her and her family.

“I’ll miss it a good amount,” Covie said of NDP. “I’ll miss the little things. I’m going to be sad to leave.”