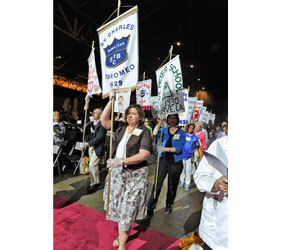 “We started with a bang,” said Lisa Taylor, associate superintendent of Catholic schools in the Archdiocese of New Orleans and local convention coordinator. “We wanted to get people all excited, and I think we did!”

Atlanta Archbishop Wilton D. Gregory, chairman of the NCEA board of directors, said NCEA has been a trusted voice in Catholic education for more than 100 years.

“We recognize that our primary task is the communication of the person and the message of Jesus Christ,” he said.

Archbishop Aymond, a former chairman of the NCEA board, also said educators must be leaders who give direction and service in the name of Christ. He said New Orleans has a strong legacy in Catholic education, dating from the Ursuline nuns who arrived in 1727. He noted that the first NCEA convention was held in New Orleans in 1913 with a much smaller crowd.

As keynote speaker April 26, Father Himes, a priest of the Diocese of Brooklyn, N.Y., said Catholic education has a more important purpose than improving the economy or producing lawyers or doctors or even priests. Educators have the task of nurturing human beings who care for others.

“If that doesn’t happen, we will become a society … with wonderful doctors who cannot relate to human beings; we’ll provide splendid engineers who produce structures but have no idea how they will unite the communities,” he said. “What we are about is shaping humanity. In the Christian tradition, humanity is what we share with God.”

He cautioned Catholic educators about imposing their own ideals of God as “God’s way” and asked educators what truly empowers people. He suggested that education is about true conversations with others.

“Everyone in a real conversation is in some way changed by the conversation,” he said. “That’s what we educators do. We lead people into conversation.”

Father Himes said many of the most interesting conversation partners are no longer here – Matthew, Mark, Luke and John, Peter and Mary, William Shakespeare, Thomas Newton, Albert Einstein, St. Augustine – but that doesn’t mean they are no longer in the conversation.

He said the experience of students learning about someone else who has lived in a different world and time than ours is enriching.

“Humanity is enriched by conversation,” Father Himes said. “We honor it (as educators) by being willing to give ourselves away to service. That’s the single most rich experience human beings have.”

He compared the classroom to a cocktail party, with the teacher as the host and the students as the new arrivals. He said teachers have the privilege of welcoming new ideas – as a host would introduce new guests to each other.

Father Himes said teachers are constantly being called upon to surrender tried and true paths.

“Leave the past and seek the future but take your ancestors with you who have shaped you into who you are,” he told the teachers. “You and I have the chance to do that by introducing them (students) into a conversation with their ancestors. Why in the name of God would anybody want to be anything by a teacher?”

In his homily, Archbishop Aymond said Mary Magdalene mistook Jesus for a gardener when she went to tomb and discovered that his body – as she knew it – was gone. But Jesus didn’t look on Mary Magdalene with anger because she didn’t recognize him. He looked at her with compassion and gently spoke her name.

“She heard his voice and recognized her name,” he said. “His words permeated her heart and her eyes were opened and she recognized Jesus.”

Archbishop Aymond said that same Jesus who spoke so gently to Mary Magdalene is speaking to Catholic educators today.

“As you commit yourself to Catholic education … in the next three days, I assure you the same risen Christ will speak your name with tenderness, with love and with intimacy,” he said.