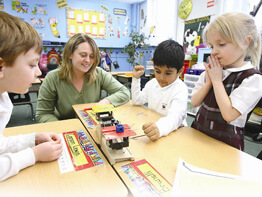 “This is an opportunity for educators from across the country to exchange ideas,” said Dr. Michael Murphy, president of Archbishop Spalding High School, Severn, whose students will be performing at the Celebration of the Arts and the NCEA convention. “We are all doing the same type of work, just in different parts of the country.”

“Sometimes people think of the convention as just Catholic schools,” said Mr. Gray. “The organization and the message is broader than that, and there are many worthwhile sessions for people working in parishes.”

Participants can attend many sessions, and four keynote speakers have been selected based on their reputations and the messages and insights they bring to the large group.

Archbishop Pietro Sambi, the apostolic nuncio to the United States, will kick-start the convention at 9 a.m. April 10.

“He is widely regarded as the Vatican’s most able diplomat,” said Mr. Gray.

Sister Clare Fitzgerald, S.N.D., a native of Massachusetts, will speak April 11 on the topic of an “Anchor of Faith, Harbor of Light.”

“She is an international lecturer on the value and distinctiveness of Catholic education,” said Mr. Gray. “In 2006, she received the NCEA St. Elizabeth Ann Seton award, given by the NCEA president, for her lifetime contributions to Catholic education.”

“He will speak as part of Catholic Sports day, a day dedicated to looking at Catholic values in sports,” Mr. Gray said.

On April 13, Mike Patin, who has worked with teenagers and youths in a variety of settings since 1984, will give a speech titled “Anchors Away!”

“The overall aim of the conference is to provide professional development and a spiritual experience for attendees,” said Mr. Gray. “The sight of thousands of Catholic educators worshiping together reinforces one of the distinctive aspects of Catholic education.”