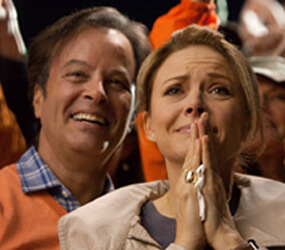 WASHINGTON – Kit Johansen has been working on anti-bullying initiatives in the Diocese of Palm Beach, Fla., since 2006 to raise schools’ and parishes’ awareness about the problem and to let children know they are not powerless in the face of bullying.

Now the coordinator of the diocesan Office of Serving Children hopes a new made-for-TV movie on the issue will make a positive contribution to bullying prevention.

Johansen attended a screening of the film “Field of Vision” in Fort Lauderdale, Fla., with children ranging from “Peewee football ages” to those in the first years of high school.

In a telephone interview with Catholic News Service June 6, she said she could “feel the energy” throughout the theater and that the youths were overall “very engaged” with the film and responsive to its underlying message.
“Field of Vision,” set to air June 11 on NBC at 8 p.m. EDT, explores the theme of bullying in schools and how standing up for what’s right pays off, despite the difficulties of doing so.

The movie, available on DVD in months to come, is part of an initiative called “Family Movie Night,” backed by Procter & Gamble and Walmart. According to a news release, the companies launched the initiative in April 2010 to produce family-friendly entertainment in response to research showing there is a demand among parents in the United States for such programming.

“Field of Vision” tells the story of how high school quarterback Tyler McFarland learns through some footage captured on an old video camera that his teammates have been bullying a new transfer student Cory Walker, who has a troubled past. Tyler is faced with a decision: Should he stand up to his teammates to help Cory or not? If he tells the football coach, his teammates could be kicked off the team, which could cost the school the state championship.

The cast includes Faith Ford, best known for her role as Corky in the hit TV series “Murphy Brown.” Ford stars as the school’s guidance counselor and mother of the star quarterback and plays a key role in encouraging her son to make the right choice.

According to a recent Public Agenda survey, nearly three quarters of Americans (74 percent) consider bullying a serious problem, and more than one-third of Americans (35 percent) say they were bullied themselves growing up.
Ford can relate. Having been bullied emotionally in junior high and in high school after cheerleading tryouts, she said she looked forward to participating in this film that speaks to both kids and parents about the importance of fighting this age-old, yet ever-new challenge in schools across the country.

“I was very excited to be part of this heartwarming movie and Family Movie Night, which examines the issue of bullying and shows the challenges and rewards of doing what’s right, even when it’s tough to do … it’s a great life lesson for kids of all ages, and I hope it spurs good conversation between parents and children on this important topic.”