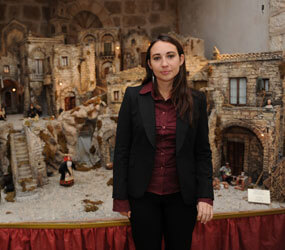 Originally inaugurated on the ground floor of the Salesian provincial house in Bethlehem on Christmas Eve in 1999, the museum was closed a few months later following the outbreak of the second intifada.

Its reopening Dec. 18 is part of a general “reawakening” of Bethlehem, said Elisa Nucci, artistic director of the museum. Nucci, an art historian and musicologist, works for International Volunteering for Development. The organization provides technical assistance to the Salesian order in 200 countries and was instrumental in renovating the museum and facilitating its reopening.

Located in an 18th-century building which once served as the provincial house’s orphanage, the museum displays about 200 representations of the Nativity donated from almost 150 countries. They include work in raku, a type of Japanese pottery; bronze, painted glass; and a contemporary piece made from painted Italian Carrara marble, the same type of marble from which Michelangelo carved his sculpture “David.”

The museum also includes a Nativity scene donated by Pope John Paul II. An expansive carved wooden Nativity scene from Madagascar depicts a traditional African village with the figures in native African dress, a woman grinding grain and an elder leaning on a wooden cane. In a smaller Nativity scene, a llama is included in the manger and baby Jesus is wearing the traditional woolen hat of the Andes.

“The Nativity scene is present in all times and places, for all people,” Nucci told Catholic News Service.

Revitalizing traditional artisan crafts of olive wood carving and work in mother of pearl is the museum’s main goal, Nucci added. Revenues from entrance fees – charged only to pilgrims and tourists – will help maintain the provincial house’s other programs including an art center, bakery and school.

“There is a tradition (of olive wood work) here in Bethlehem, but young people no longer want to learn the work of their grandfathers,” Nucci said. “The only way to keep a tradition alive is to teach it to the young.”

Much of the art of wood carving and mother of pearl work has fallen to the level of solely being manufactured for tourist souvenirs rather than protecting the integrity of the artistic traditions of Bethlehem, which were first brought to the Middle East by Franciscan priests eight centuries ago, she explained.

Toward that end, the Salesians run an art institute on the grounds of their provincial house, which, together with the museum, forms the Salesian Artistic Center. The institute offers a one-year course for young people in the traditional arts.

“An art student needs to travel, to see other styles of art. But here it is very difficult for Palestinian students to travel so we are bringing the art to them,” Nucci said, standing in front of a large Nativity scene made in Italy.

Museum staff acknowledged that they face the challenge of attracting visitors. Located in the Old City at the beginning of Star Street a short walk from Nativity Square, the museum is not on the established tourist route. Most groups are bused in as close to the Church of the Nativity as possible, leaving little time for exploring the city, Nucci said.

Sculptor Fawzy Nastas demonstrated his work during the opening. He appreciated the opportunity to display his craft to visitors.

“This is something really special because it represents both sides of the value of Bethlehem: the religious side about the birthplace of Jesus and the artisan side by showing real art,” he said as he carved a block of marble.