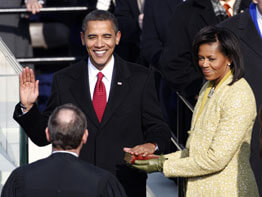 WASHINGTON – The United States’ multiple religious traditions are “a strength, not a weakness,” said President Barack Obama Jan. 20 in his inaugural address.

“Our patchwork heritage is a strength, not a weakness,” said the nation’s 44th president.

“We are a nation of Christians and Muslims, Jews and Hindus – and nonbelievers,” he continued.

“We are shaped by every language and culture, drawn from every end of this earth; and because we have tasted the bitter swill of Civil War and segregation, and emerged from that dark chapter stronger and more united,” he said, “we cannot help but believe that the old hatreds shall someday pass; that the lines of tribe shall soon dissolve; that as the world grows smaller, our common humanity shall reveal itself; and that America must play its role in ushering in a new era of peace.”

Obama acknowledged the challenges facing the country throughout his 2,400-word address, delivered before a teeming throng at the Capitol and stretching forth on the National Mall. It was believed to be the largest single gathering of people in Washington history.

“Our challenges may be new. The instruments with which we meet them may be new,” President Obama said. “But those values upon which our success depends – hard work and honesty, courage and fair play, tolerance and curiosity, loyalty and patriotism – these things are old. These things are true. They have been the quiet force of progress throughout our history.”

So “what is demanded,” the new president said, “is a return to these truths.”

“What is required of us now is a new era of responsibility – a recognition, on the part of every American, that we have duties to ourselves, our nation and the world,” he said.

These are duties “we do not grudgingly accept but rather seize gladly, firm in the knowledge that there is nothing so satisfying to the spirit, so defining of our character, than giving our all to a difficult task. This is the price and the promise of citizenship,” he said.

“This is the source of our confidence – the knowledge that God calls on us to shape an uncertain destiny,” he said.

Regarding the economy,” President Obama said the situation “calls for action, bold and swift, and we will act – not only to create new jobs, but to lay a new foundation for growth.”

“We will build the roads and bridges, the electric grids and digital lines that feed our commerce and bind us together,” he continued. “We will restore science to its rightful place, and wield technology’s wonders to raise health care’s quality and lower its cost.

“We will harness the sun and the winds and the soil to fuel our cars and run our factories. And we will transform our schools and colleges and universities to meet the demands of a new age. All this we can do. And all this we will do,” he said.

President Obama said that “there are some who question the scale of our ambitions – who suggest that our system cannot tolerate too many big plans.”

But “their memories are short,” he said. “For they have forgotten what this country has already done, what free men and women can achieve when imagination is joined to common purpose, and necessity to courage.”

Before the inauguration ceremony, Obama and then-Vice President-elect Joseph R. Biden Jr. and their wives took part in a morning prayer service at St. John’s Episcopal Church, across Lafayette Park from the White House. The sermon at the private service was delivered by Bishop T.D. Jakes, pastor of the Potter’s House megachurch in Dallas and more recently a writer and producer of films, including “Not Easily Broken” and “Woman Thou Art Loosed.”

The day before, both President Obama and Vice President Biden joined volunteers in various service projects on the national observance of the Rev. Martin Luther King Jr. birthday holiday, which was designated as a national day of service.

Among the numerous service projects in the nation’s capital was a coat drive sponsored by the Knights of Columbus. The fraternal organization purchased 7,800 coats from Oshkosh B’gosh and London Fog and distributed 1,200 of them at three Catholic churches in Washington.

The purchase was made through the Knights’ “Coats for Kids” program to help needy children stay warm in the winter.

Vice President Biden worshipped and received Communion Jan. 18 at Holy Trinity Church in the Georgetown neighborhood of Washington. His granddaughter had received her first Communion at the same church in 2008.

Jesuit Father Larry Madden’s homily, according to The Associated Press, focused on God as a constant anchor and the promise of hope and change for those who believe. The assembly was asked to pray for “wisdom and integrity” to guide the new president and his administration.

Holy Trinity is the same church where President John F. Kennedy worshipped while in Washington, including a morning Mass Jan. 20, 1961, before his own swearing-in.