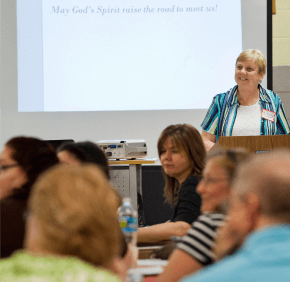 By Elizabeth Lowe
elowe@CatholicReview.org
ELLICOTT CITY – Because of the preparation the Archdiocese of Baltimore has provided her, Monica Souza believes she is better equipped to minister to others.
“It helps to understand where you have been and center your experience,” Souza said, of the Equip for Ministry program. “It really brings something else, another set of tools, when you’re doing your planning or discussion.”
Souza, 51, is a third-grade religious education teacher, parish council president and extraordinary minister of holy Communion at Church of the Resurrection in Ellicott City.
She was one of 27 adults who attended the first of eight sessions in “A Call to On-Going Conversion” at her Howard County parish July 8.
That is one of eight Equip courses that will be offered in 2014-15 for those who serve at Catholic schools and parishes, specifically in campus, catechetical, disability, marriage, prison, social justice, worship and youth ministries; adult faith formation; finance committees; pastoral councils; and Rite of Christian Initiation of Adults teams.
Catholic school teachers must take one Equip course per year while parish volunteers are encouraged to enroll.
The archdiocesan program, which develops lay ministers in the areas of human, spiritual, intellectual and pastoral formation, began as a pilot program in 2010.
Four years in, it has been recognized as a national leader, as it earned the New Wineskins award from the National Conference for Catechetical Leadership (NCCL) May 20, an honor that was recognized during the Catholic Center’s summer picnic June 24.
The award acknowledges achievement and innovation for catechesis and evangelization at the diocesan level, according to the NCCL.
Julie St. Croix, coordinator of pastoral leadership formation for the Department of Evangelization, called the honor affirmation for the archdiocese, which delivers instruction in person and online.
“This recognizes that this is a diocesan program that tries to address the needs of formation for ministers and is trying to do it in a way that is flexible,” St. Croix said.
Souza, meanwhile, is taking her fourth Equip class since 2012.
“It has made me more open to a lot of things,” she said. “You can talk about your relationship with God and it’s not weird.”
Her instructor, Sister of St. Joseph Sally Russell, coordinator of lifelong faith formation for the Division of Catechetical and Pastoral Formation, said the program isn’t about giving adults new information, but rather more meaningful ways in which to share their faith.
“It (Equip) deepens the relationship with God and self so they can encounter others in a more authentic role as disciples,” she said. “They’re coming to a deeper understanding of our faith and practices.”
During the July 8 class at Resurrection, Sister Sally emphasized the presence of the catechist as the most important element of faith formation.
“You stand before the children very authentically, sharing the faith,” she said. “It’s your person and your sincerity and discipleship that speaks more than anything else.”
Sister Sally said ministers should be aware of God’s presence.
“God wants us to be silent because spirituality is a relationship,” she said. “God is the initiator.”
Stephanie Bechtel, a first-grade teacher at School of the Cathedral of Mary Our Queen in Homeland, has taken three Equip courses in as many years and plans to begin her fourth next month.
A moral theology course she completed last fall has had the greatest impact.
“It helped me to question my role as a Catholic educator and as a Christian and it helped me go to church more,” said Bechtel, 49, a parishioner of Church of the Nativity in Timonium. “Going to church every week has helped me to be a better teacher to my first graders. I’m able to talk to them about the Gospel in a way they’re able to understand it.
“I don’t think I would have had the opportunity had I had not taken that class.”
For information about the program, visit archbalt.org/evangelization/equip
Equip for Ministry by the numbers
2010 year the program began
4,604 courses completed
2,700 people have taken courses
468 courses taken by Catholic school teachers of other faiths
8 courses offered for 2014-15
Also see:
Secret Service: Order of Malta casts a long, spiritual shadow
Camp Glow elicits joy
‘A walk down memory lane’: Archdiocese bids farewell to Bishop Rozanski
PrevNext