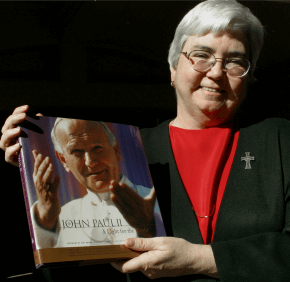 By Catholic Review Staff
A funeral Mass for Sister of Mercy Mary Mark Walsh was offered July 15 at The Villa, a Baltimore retirement convent. Sister Mary Mark died July 12. She was 97.
A native of Reisterstown, Sister Mary Mark was catechized by Jesuits at Woodstock College. She followed in the footsteps of her older sister, Sister Blanche Elizabeth, and entered the Sisters of Mercy in 1936. She became an elementary school teacher and taught in the Archdiocese of Baltimore at St. Gregory’s School, Baltimore , 1940-42; St. Peter School, Oakland, 1947-49; Little Flower, Woodstock, 1954-57; Mount Washington Country School, Baltimore, 1975-78; and Immaculate Heart of Mary School, Baynesville, 1981-90. She also taught elsewhere in Maryland and in the southeastern U.S.
Sister Mary Mark graduated from Mount St. Agnes College in Baltimore in 1954 and later took graduate classes at what are now Loyola University Maryland and the Notre Dame of Maryland University. She moved to The Villa in 1990, where she served until 2002 as a pastoral care volunteer.
To read more obituary articles, click here.
PrevNext