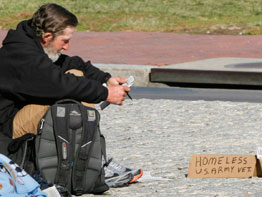 WASHINGTON – Competitive and territorial barriers that once kept Catholic agencies from working too closely together are slowly breaking down in communities across the country in favor of stronger collaboration to better serve clients in need, according to a national organization that promotes the benefits of cooperation among church-based ministries.

Cleveland-based Ministering Together has embarked on a new campaign to promote collaboration among Catholic Charities systems, Catholic hospitals, parishes and Catholic social service agencies as well as public entities in serving and advocating for families and sick, homeless, mentally ill and elderly people in need of multiple services.

“The whole premise is built on the fact that we cannot do alone as well as what we can do together, and that we can serve God’s people to a greater degree if you break down silos and look at the person as a whole person,” said Sister Judith Ann Karam, president of the Cleveland-based Sisters of Charity Health System and a member of Ministering Together’s executive committee.

“It’s all about the people we’re serving,” she told Catholic News Service.

Sister Judith Ann, a member of the Sisters of Charity of St. Augustine, has been part of the effort since its early days when it was known as New Covenant. She credited retired Auxiliary Bishop Joseph M. Sullivan of Brooklyn, N.Y., for setting the vision for the organization at its inception in 1995.

“He really understands what we’re trying to do here: forming relationships and relationships are community,” she said. “This is the church in the true sense of the word, … centered on God as the source of our ministry and focused on the people of God as our service.”

Bishop Sullivan early on described the effort as “an understanding of the church as community.” He has said the work of Ministering Together is “a wonderful companion piece” to Pope John Paul II’s 2001 pastoral letter, “At the Beginning of the New Millennium.” In it the late pope called for strengthening a “spirituality of communion” by effectively using the structures of participation and consultation provided for in church law.

Such diversity allows for the creativity and expertise that exists in each organization to be utilized for the benefit of all, said board member Matthew Thibeau, who works for Cincinnati-based CFM Religion Publishing Group LLC. “We just want to empower through enlightening,” he said.

To a certain extent, what Ministering Together promotes runs counter to mainstream society in the mind of Bishop Dale J. Melczek of Gary, Ind., who chairs the organization’s board.

“The Holy Father (Pope Benedict XVI) makes note of the extreme individualism in society,” Bishop Melczek told CNS. “That’s the trend of society, but really the Holy Father urges collaboration and solidarity with the needy and those on the fringes of society.”

While Ministering Together has identified more than 100 collaborative efforts across the country, the organization holds up several keystone programs as the vanguard of how local church-based ministries can evolve.

In Tampa-St. Petersburg, Fla., a partnership of Catholic Charities, the Diocese of St. Petersburg and two hospitals within the BayCare Health System – St. Joseph’s Women and Children Hospital and St. Anthony’s Hospital – has aided members of the Hispanic community in obtaining health care, housing and education for children.

The three organizations have brought in the Society of St. Vincent de Paul, Mercy Housing, parish volunteers and public schools in offering a seamless array of services, allowing individuals and families to move easily from agency to agency to have their needs met.

In Cleveland, Catholic Charities joined with the Sisters of Charity Health System and the system’s partnership with University Hospitals Health System to form the Caritas Connection because they shared similar missions and value systems. The collaboration has meant that individuals can better access services that no one agency offers.

Subsequently, parishes were recruited for the effort, allowing staff members and volunteers to serve at the sisters’ hospitals. Since then, further outreach was directed to individual parishioners with specific needs.

With the hiring of Leonard Calabrese as Ministering Together’s new executive director in April, the organization is looking for opportunities to bring a broader array of parishes, schools and agencies together.

“We’re looking at how we can foster more strategic partnership,” Calabrese said. “By working together, the core idea is that ministries of the church can more effectively and authentically fulfill the caring, healing and teaching mission of Jesus.”

Mr. Calabrese is no stranger to coalition-building. Prior to joining Ministering Together, he served for 21 years as executive director of the Commission on Catholic Community Action in the Cleveland Diocesan Social Action Office. He helped build partnerships among northeast Ohio parishes, colleges, social service agencies and advocacy groups to promote social justice.

Ministering Together poses a new challenge for Mr. Calabrese: strengthening partnerships and promoting the efforts of organizations working on behalf of the poor and vulnerable.

“There are so many challenges in our world that we have to be better at working together,” he said, “better at cooperating with each other for the common good and to respond in a creative and credible way.”

More information about Ministering Together is available online at: www.ministeringtogether.org.