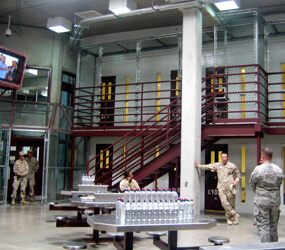 WASHINGTON – Religious leaders have renewed their call to Congress seeking the immediate closure of the U.S. military prison at Guantanamo Bay, Cuba.

The prison “is the symbol of our country’s violation of our deepest values” and must be closed immediately, the group of more than 40 religious leaders said in a Nov 12 letter sent by the National Religious Campaign Against Torture to the Democratic and Republican leadership of the House of Representatives and the Senate.

“Regardless of how it is operated now compared to how it was operated in earlier years, it stands in the minds of hundreds of millions of people in our nation and around the globe as a place where America broke faith with itself and used torture as an interrogation technique,” the letter said.

Closing the prison now rather than later will allow the country to begin to heal spiritually and “put an end to this dark and errant chapter in our history,” the leaders wrote.

As for the remaining 200 detainees, the leaders suggested that “appropriate alternative sites” can be found for their detention until they go to trial.

Among those signing the letter were Sister Jane Burke, a School Sister of Notre Dame who is executive director of the Leadership Conference of Women Religious; Father Thomas Cassidy, a Sacred Heart of Jesus priest who is president of the Conference of Major Superiors of Men; and Marie Dennis, co-president of Pax Christi International.

Others signatories include Bishop Gregory Vaughn Palmer, president of the Council of Bishops of the United Methodist Church; Sayyid Syeed, national director of the Office for Interfaith and Community Alliances for the Islamic Society of America; the Rev. Michael Kinnamon, general secretary of the National Council of Churches; and Rabbi Ellen Lippmann, who co-chairs Rabbis for Human Rights-North America.

President Barack Obama signed an executive order Jan. 22 calling for the prison to be closed within a year. Recent comments from the White House have indicated the deadline may not be met.

On Nov. 12 the Obama administration announced that White House counsel Greg Craig would leave his post in January, which fueled speculation, according to an AP story, that the president’s promise to close the prison “had gone awry” under Craig’s watch.

At the same time U.S. Attorney General Eric Holder announced that five Guantanamo detainees will be sent to New York to be put on trial in civilian federal court for the 9/11 terrorist attacks. One of them, Khalid Sheikh Mohammed, told interrogators shortly after his arrest that he had planned the attacks. Another five detainees will face military trials for various terrorism charges.

Anti-torture activists and religious leaders have charged that the human rights of hundreds of detainees have been violated since the prison opened in 2002.

Witness Against Torture, a largely faith-based group working to close the prison for nearly eight years, has announced it will conduct a daily fast and vigil Jan. 11-22 to push the president to keep his pledge.