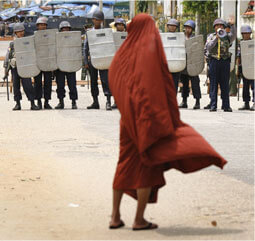 YANGON, Myanmar – Bishops in Myanmar have called on Catholics to cut down on external celebrations of Advent and Christmas this year and focus on promoting peace and development.

In September, the government cracked down on protests – led by Buddhist monks – against rising prices and corruption. Myanmar is a predominantly Buddhist country.

In the message sent to all parishes, the bishops proposed that the church “observe the season of Advent and celebrate the feast of Christmas more in accordance with the spirit of prayer and penance.”

“We would like to exhort all the faithful of the dioceses to cut down on the external forms of celebrating the feast such as carol singing, Christmas parties and similar gatherings,” the bishops said.
Instead, they suggest Catholics “spend much time in silent prayer and contemplation, in adoration of the eucharistic Lord and in having common fasting and almsgiving.”

The bishops’ conference issued the message after a meeting in Yangon Nov. 30. Archbishop Salvatore Pennacchio, apostolic delegate in Myanmar, also attended that meeting.

Father Dominic Thet Tin, executive secretary of the conference, told UCA News the bishops are “exhorting people to focus more on the spirit of prayer and penance in the season of Advent and during the Christmas celebration in order to promote national peace, development and prosperity in our beloved country.”

“We should celebrate the feast of Christmas with prayers; otherwise we are busy with Christmas parties and similar gatherings,” he said Dec. 5.

He told UCA News the call for a more low-key, thoughtful Christmas derives from the need to “guide the people’s spirituality to celebrate Christmas meaningfully.”

Xavier Kyaw Nyunt, president of the National Catholic Youth Commission, said that in his Yangon parish people usually go caroling, and other entertainment and games are held Dec. 28, just after Christmas.

“Caroling is our way in the Christmas season to tell the good news,” he told UCA News. “By doing this, not only Catholics but also people of other faiths hear about Christmas, but I think we do not have that feeling this year.”

Recent problems in the country have caused a change of heart, he said.