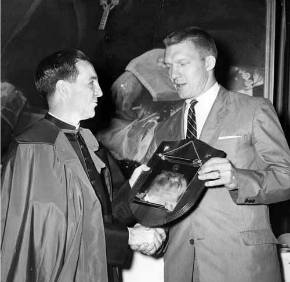 A national TV audience saw Jim Mutscheller excel in the final two plays of the Baltimore Colts’ 1958 NFL title game win over the New York Giants in overtime. “The Greatest Game Ever Played” remains a cultural landmark, a vital leap in growing the remarkable popularity of American pro football.
Some mornings at the Cathedral of Mary Our Queen in Homeland, meanwhile, the only person witnessing Mutscheller’s dedication was the priest celebrating Mass.
“My Dad went to 6:45 a.m. Mass every morning at the cathedral,” said his son, Jim. “When the altar boys didn’t show, he was up there, bringing the water and wine to the priest, ringing the bells.”
Mutscheller, 85, died April 10 of kidney failure. He played tight end for the Colts from 1954 to 1961, when their roster was filled with celebrities and Catholics.
Art Donovan, Gino Marchetti, Johnny Unitas and others made the Pro Football Hall of Fame. Mutscheller won their admiration and respect, first with his low-key demeanor and performance, then for the values he exhibited as a family man and Catholic philanthropist.
“Jim epitomized the faith,” said Father Christopher Whatley, the pastor of St. Mark in Catonsville. “He was the Catholic layman at its finest.”

Related article: Donovan loved his family more than he loved himself

Mutscheller grew up in Beaver Falls, Pa., where he was raised in St. Mary’s Parish and attended its grade school. According to a 1956 profile in the Catholic Review, one of his aunts was a Sister of Divine Providence.
He went to the University of Notre Dame in South Bend, Ind., was a sophomore on its 1949 national champions and captained the Fighting Irish in 1951. When Notre Dame played the U.S. Naval Academy at M&T Bank Stadium in recent years, Mutscheller would watch not from a luxury suite, but in the stands.
He was an officer in the U.S. Marine Corps in Japan and Korea, and joined the Colts in an era when players struggled to make ends meet.
“He was ready to go into the business world full-time until Don Kellett (the Colts’ president and general manager) gave him a $1,000 raise, to $6,000 a season,” said his wife of 59 years, Joan, better known as Pert. “Nobody had a lot of money, but we had a lot of fun.”
When the Mutschellers celebrated their 50th wedding anniversary by renewing their vows at a special Mass, the celebrant was Bishop Francis Malooly, then a Baltimore auxiliary, now the bishop of Wilmington, Del.
He will officiate at a funeral Mass for Mutscheller at St. Joseph in Cockeysville April 15, at 11:30 a.m. In lieu of flowers, the family asks that donations be made to the Little Sisters of the Poor, one of the many charitable causes he championed.
“He was drawn to that apostolate, drawn to the less fortunate,” said Father Whatley, who met Mutscheller in the 1970s. “He thought, ‘God has blessed me, I’m going to bless them.’
“Jim used to share that attending Notre Dame taught him the importance of giving witness to his faith. He was a beacon of the light of Christ, a true Catholic gentleman.”
The Mutschellers have been parishioners of St. Joseph since 2001. Before that, they were regulars at the cathedral, where their four sons, Jim, Michael, John and Steve, all attended the parish school.
All of the boys excelled in athletics. Jim and Michael went to Calvert Hall College High School in Towson, John to Boys’ Latin and Steve to Loyola Blakefield and then Johns Hopkins University, where he was a third-team lacrosse All-American.

“He didn’t miss a single sports activity of ours, no matter what it took,” said his son, Jim.

In later years, Mutscheller continued to sell insurance and was active in the Baltimore chapter of former NFL players. At one visit to the Franciscan Center, Donovan, who died in 2013, told the Review that Mutscheller “gets everyone together. He’s like our savior.”
Father Lou Martin, now pastor of the Catholic Churches of Glen Burnie, became chaplain of the group in May 2004.
Three months later, he baptized Adrian Mehrling, the group’s secretary-treasurer. The godparents? The odd couple of Donovan and Mutscheller, the former a regular on The Late Show with David Letterman, the latter so buttoned down that his sons joked he would wear a coat and tie to eat crabs.
In that 1958 title game, on the Colts’ winning drive in overtime, Mutscheller caught a six-yard pass from Unitas and was tackled at the one-yard line. On the next play, he helped clear a wide hole for Alan Ameche, whose dive gave Baltimore a 23-17 victory and its first world championship.
He caught 220 passes for the Colts, 40 for touchdowns.
Mutscheller was active in the Catholic War Veterans, and a member of the Knights of Columbus. In 1961, he received the Catholic Athlete of the Year award at the CYO Breakfast of Champions.
A viewing for Mutscheller will be held April 14, from 4-7 p.m., at Ruck Funeral Home on York Road in Towson.