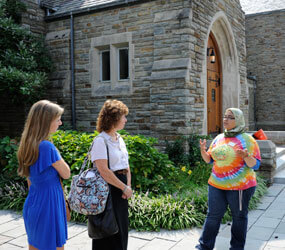 It’s a hot afternoon in late August in Baltimore, and high-schoolers in casual summer attire and their parents are getting a tour of Loyola University Maryland.

The rising sophomore guiding them around campus wears jeans, a tie-dyed T-shirt atop another that covers her elbows – and a hijab, the headscarf that makes it clear that Sanaa Mahfouz is not your typical student at the Jesuit institution.

Born in Egypt, Mahfouz received her K-12 education in public schools on Baltimore’s east side. That’s where she and her family reside, make a living and worship in assorted mosques, which begs the question: What’s a young Muslim lady like her doing at a Catholic college?

“My mom gave me a 10-mile radius when we were looking at colleges, because she wanted me to study close to home,” Mahfouz said. “We really liked Loyola, the Jesuit approach. ‘Cura personalis’ (care for the entire person), we definitely believe in that.

“In public high school, history class was the only place we talked about religion. Here, we found that spirituality was stressed.”

Mahfouz spoke a few days before Eid al-Fitr, the festival that marks the end of Ramadan, the Islamic month of fasting.

She is a keen observer of the “Arab Spring” that is in the process of ousting Libyan dictator Moammar Gadhafi, after earlier toppling Egyptian president Hosni Mubarak.

A naturalized citizen of the United States, Mahfouz was not taken aback by the cheers in her psychology class last May, the morning after Osama bin Laden was killed by U.S. special forces.

“I was very happy they caught him,” she said.

As the United States nears the 10th anniversary of the Sept. 11, 2001, terrorist attacks by Islamic fundamentalists of al-Qaeda, which was founded by bin Laden, she welcomed the opportunity to discuss her faith and possible misconceptions about it (see related article).

As a Loyola freshman, Mahfouz was a panelist at an event sponsored by the student government.

“I was on a panel with a Jew, a Hindu, a Protestant and a Catholic,” she recalled. “Islam is not what you see depicted on TV, terrorist this, terrorist that. We are a peace-loving people. We don’t give donations just to Islamic people, we give to all.

“News and movies take the worst aspects of a society, and sensationalize them. The movies are there to make money. The news concerns itself with what’s going on wrong in the world, not what’s right.”

Mahfouz said that her father, Hassan, left Egypt and sought a better opportunity in America. He drove cabs, saved, sent for his wife and their four children when Sanaa was 4 years old, and now owns and operates a pizzeria in Greektown.

Mahfouz’s goal is to get into medical school. She traces her thirst for learning to her mother, Fathia Ellabanny.

“Her dad didn’t let her go to school,” she said. “After I saw what she could have done, I put that motivation to my advantage, to go on to a better life.”

After graduating from Patapsco High School in Dundalk, Mahfouz followed in the footsteps of her older sister, Soad, who earned a Loyola degree in 2008 and commutes to Washington, D.C., where she works at the Saudi Arabian embassy.

Both have been taught at Loyola by Angela Christman, a professor of theology.

“Over the years, I’ve taught Jewish and Muslim students,” said Christman. “One of the reasons they come to a Catholic university is that it’s a place where faith is respected. Even though their beliefs aren’t the same as ours, they know their faith will be respected.”

Christman is a parishioner of St. Augustine in Elkridge. The saint’s “Confessions” are in her Introduction to Theology syllabus, along with “ideas in the Bible we share,” she said.

“Mary is revered in the Muslim tradition,” Christman said. “I’m told there are pilgrimage sites in the Middle East where Christians pray to Mary, side by side with Muslims.”

Mahfouz said that “only two” prospective Loyola students have asked about her faith since she began leading tours in May. She began wearing the hijab as a fourth-grader, a few months after 9/11 changed the world.

“Most kids in my class didn’t know I was Muslim,” she said. “Some of them stopped talking to me. Some had family in New York. It was devastating to everyone.”

Ten years later, she reports that ALANA (African, Latino, Asian and Native American) Services at Loyola is working with campus ministry to find a suitable location on campus for Muslims to gather for prayer and meditation.

“I was extremely excited when they told me that,” Mahfouz said.