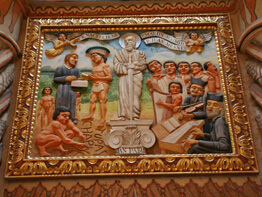 CONCEPCION, Bolivia – While the painstakingly restored churches in eastern Bolivia may be the crown jewels of South America’s colonial Jesuit missions, the real gems were found in several decrepit boxes after nearly two centuries of neglect.

In 1972, while he was beginning restoration of the early missions, Swiss architect Hans Roth found boxes and piles of music in the churches in San Rafael and Santa Ana de Velasco. Some were fragments, while others were nearly complete scores.

The music was found “in an unfortunate state,” said JavierMendoza, director of the museum and music archive in Concepcion. Nevertheless, he said, “the interesting thing is that the people kept it.”

The scores connected singers in the communities with the Jesuit missionaries who brought classical music to this region of Bolivia, called the Chiquitania, in the late 1600s. Photographs from the 1950s show members of choirs in the churches holding the scores, even though they did not know how to read music, Dr. Mendoza said.

Dr. Roth salvaged about 5,000 sheets of music and took them to the larger town of Concepcion, where musicologists could study and catalog them. Experts then began the painstaking task of preserving the manuscripts.

The collection “is the repository of colonial music in the Americas and the only one containing music by Dominico Zipoli, by far the most important European composer to emigrate to the Americas before the 19th century,” said Julieta Alvarado, a Panamanian-born harpsichordist and music professor at Southwest Minnesota State University.

Because the pages were dirty and wrinkled, before restoration work could start they had to be dampened and flattened, then dried and cleaned. The actual restoration began last year with funding provided by the Spanish government. In some cases, the sheets must be washed using a special technique, Dr. Mendoza said. In others, holes must be filled.

“We do not fill in missing parts” of the music, he said. “We are not reinterpreting” the pieces. “That is the job of musicologists.”

The restorers’ task is to stabilize and preserve the music so that musicologists can study it and musicians can perform it. The scores have been photocopied so that researchers do not handle the originals. The restoration techniques were chosen carefully.

Dr. Mendoza estimates that the restoration will cost about $200,000 in all. A special, climate-controlled room has been designed for the archive, and plans include better security and fire-suppression systems.

Future plans also include capitalizing on the experience the restorers have gained and offering restoration services as a way of generating revenue to support the archive and museum, he said.

Dr. Mendoza’s dream is to publish a book of the musical scores “so they reach more people.”

With the restoration of the archive, the music that flourished in the Jesuit missions in the late 1600s and early 1700s and remained hidden for nearly two centuries after the Jesuits were expelled from the Spanish colonies has come to light again.

The baroque music festival held every two years in the Chiquitania is a showcase for the missions, the music that was played and composed there, and young local musicians who have forged a link with their ancestors through the ancient melodies.

“With music,” Dr. Mendoza said, the Chiquitania “has left its mark on the world.”