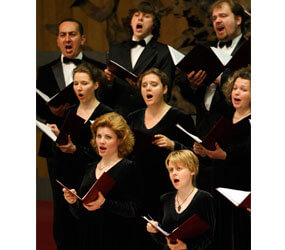 VATICAN CITY – The gentle notes of Sergei Rachmaninoff’s “Vocalise” wafted through the Vatican audience hall and carried with them hopes for improved relations between the Roman Catholic Church and the Russian Orthodox Church.

After years of tense relations and painstaking theological dialogue, the Vatican and the Russian Orthodox Church are hoping music and art can create an atmosphere more conducive to their efforts to promote Christian unity.

For leaders of both churches, the artistic compositions are not simply window dressing; they are evidence of how much Catholics and Orthodox share and are reminders of how Christianity has shaped European culture.

The May 20 concert capped two days of meetings and a conference that focused on “Russian culture and spirituality in the Vatican.”

The last piece on the musical program was “The Song of Ascent,” composed by Hilarion Alfeyev, otherwise known as Metropolitan Hilarion of Volokolamsk, the chief ecumenist of the Russian Orthodox Church.

Metropolitan Hilarion sat near Pope Benedict XVI at the concert, which was performed as a gift to the pope from Patriarch Kirill of Moscow.

Meeting journalists May 19, Metropolitan Hilarion said, “It seems to me that there are things which cannot be transmitted either through theological discourse or diplomacy, but can be transmitted through the language of art.”

While theological dialogue is essential for resolving the 1,000-year-old split between the Christian East and West, “the dialogue of the heart” is also necessary, he said.

“Through music we can say something we cannot say through words or diplomatic means or even through theological terms,” he said. “The dialogue between cultures can bring many good results. It can liberate us from prejudices, from negative feelings toward each other, which we may have inherited from the past.”

Archbishop Gianfranco Ravasi, president of the Pontifical Council for Culture, told reporters that the work of the Russian composers chosen for the concert “demonstrates not only the quality of Russian music, but also how it is continuously interlaced with faith.”

Pointing out the influence of faith on centuries of European art, music and literature is part of both churches’ efforts to remind Europeans that Christianity has inspired not only the beauty they see and hear around them, but also the values that have built their democracies and encouraged them to defend human rights and human dignity abroad.

After the concert, Pope Benedict told the audience that “contemporary culture, especially European culture, runs the risk of amnesia – of forgetting and therefore abandoning the extraordinary patrimony that flows from and is inspired by Christian faith.”

Obviously that heritage includes prayer and service, but also centuries of fruitful dialogue between Christianity and the arts and cultures of different peoples, he said.

Pope Benedict said Catholics and Orthodox must work together to help people today see the dangers of ignoring God and of pushing faith out of both private and public life; human dignity itself is threatened when people do not recognize that dignity flows from being created by God and is not the result of a majority vote on who deserves full rights and protection and who does not.

During the concert, Metropolitan Hilarion read a message from Patriarch Kirill, who praised the idea of improving relations through cultural exchanges.

“To understand a people, you need to listen to their music,” the patriarch said.

“Music is a particular language that allows us to communicate with our hearts. Music is able to transmit feelings from the human soul and about spiritual states that words are not capable of describing,” he said.

While improving Vatican-Russian Orthodox relations was an obvious goal of the concert, both Metropolitan Hilarion and top Vatican officials believe that Christians in Europe have a common mission that cannot be put on hold while the churches attempt to find unity.

“Today, both of us see the importance of promoting Christian values in society. We cannot reduce our relations to just the unresolved theological questions,” Metropolitan Hilarion said.

Addressing a symposium on “Orthodox and Catholics in Europe Today” May 19, he said that up until the Second World War, “the relationship between the Orthodox and Western Christian churches was marked by rivalry.” But Europe’s “tragic history of violence” has made it clear to both that “we must build bridges, write new pages in the history of our relations.”

And as more people seem to lose their way ethically and turn their backs on faith, “we do not have a right to concentrate only on that which divides us,” he said at the Russian Orthodox Church of St. Catherine.

Cardinal Walter Kasper, president of the Pontifical Council for Promoting Christian Unity, told the conference that a new evangelization, “connected to a re-inculturation of the Gospel in Europe, is possible only if it is done ecumenically, in collaboration with the other churches and Christian communities.”

But he also said the process could be moved forward if the Russian Orthodox patriarch would finally agree to meet the pope, a meeting the Russians continue to say – and Metropolitan Hilarion repeated – can’t be scheduled until Catholic-Orthodox tensions are resolved in Western Ukraine.

From the Vatican’s point of view, “a meeting between the pope and the Russian patriarch would be an important sign that would make visible and more credible our common commitment,” Cardinal Kasper said.