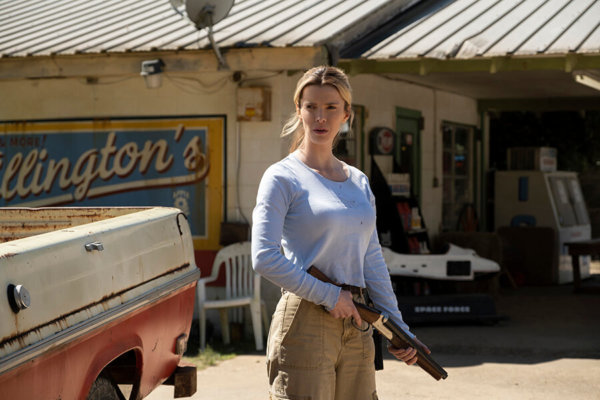 Betty Gilpin stars in a scene from the movie "The Hunt." (CNS photo/Universal)

Unfortunately, as scripted by Nick Cuse and Damon Lindelof, the film is also deliberately outrageous in its gruesome portrayal of characters being maimed and killed. So the overall effect winds up being more sadistic than satiric.

The premise is as simple as it is wild. Led by disgruntled wealthy executive Athena (Hilary Swank), a group of elite fat cats kidnaps a dozen red-state types, aka “deplorables,” and hunts them for sport.

Most of their victims are taken out easily enough. But the one-percenters discover too late that hard-as-nails Crystal (Betty Gilpin) is prepared to put the combat skills she learned while serving in Afghanistan to good use against them.

It’s hard to appreciate the humor, after all, while an eyeball is being pierced by the heel of one of Athena’s shoes — Manolo Blahniks, no doubt — or a villain is being vaporized by the hand grenade an opponent has stuffed into his pants. Those on the trail of wholesome entertainment should avoid this needlessly cringe-inducing killing spree.